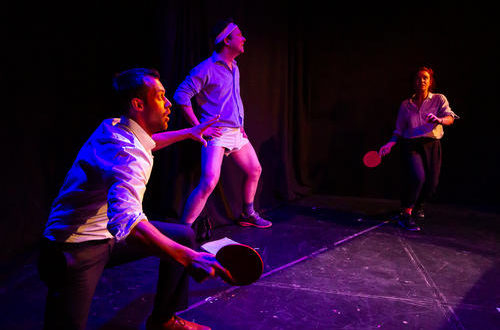 INK is a collection of nine short plays which were commissioned as part of The Feast from the East, a festival of drama and performance in Suffolk. Now in its fifth year, the festival visits London for the first time, representing the cream of East Anglian drama. But there’s nothing provincial about this world-class collection. With most of the nine plays comedies, all have at least a few laugh-making lines. Included within the plays are two commissioned for this year’s INKredibles challenge - five minute plays inspired by Wellington boots. The evening opens with Another Suitcase, Another Hall by&hellip;

INK is a collection of nine short plays which were commissioned as part of The Feast from the East, a festival of drama and performance in Suffolk. Now in its fifth year, the festival visits London for the first time, representing the cream of East Anglian drama. But there’s nothing provincial about this world-class collection. With most of the nine plays comedies, all have at least a few laugh-making lines. Included within the plays are two commissioned for this year’s INKredibles challenge – five minute plays inspired by Wellington boots.

The evening opens with Another Suitcase, Another Hall by Richard Curtis – yes, that Richard Curtis. It’s a hilarious short featuring Amber Muldoon as a soprano whose dress rehearsal for her song from Evita is constantly frustrated by William Kempsell’s neurotic producer, who can only obsess over how the suitcase should be portrayed on stage. Lightweight, but fun.

The mood shifts with invisible Irene, a monologue by Jackie Carreira, featureing Ann Bryson in a strong role as a likeable, overweight woman in her 50s, as she weeds her wardrobe. “My hips arrived at 30, my arse arrived at 40 and I lost my rhythm at 50,” she confesses. When asked her views on breastfeeding, she replies: “No thanks, I’m lactose intolerant.” Barbed and witty, this is a sympathetic portrayal of a woman who feels that she’s reached the age when the weight of everything she hasn’t done is heavier than the weight of everything she has.

Ed Jones’s sublimely innovative Ping Pong Club features William Kempsell as the founder of an after-work table tennis club, with Holly Ashman as the only other member. The sharp dialogue is perfectly matched by Tim Bentinck’s taut direction; when Will Howard arrives to close the club down, a battle for survival ensues – a battle played out in table tennis, with realistic movement and perfectly timed sound effects making up for the lack of a physical table. The final slow-motion showdown is theatrical genius.

After Prospero by Martha Loader is a parable loosely based on The Tempest, featuring Amber Muldoon as Ariel, living in a house whose ground floor is so flooded that she has to climb into her upstairs room through the window. When her sister Miranda (Tessa Wojtczak) returns for their father Prospero’s wake, their separate lives are laid bare. It’s a serious and somewhat confused short, which tries to cram too much analogy into too shaky a framework.

Shaun Kitchener’s hugely entertaining That’s Great! opens the second half, with Ed Jones delivering a sparkling performance as a gay man whose flatmate (Will Howard) is apparently sympathetic to his frustrated longing for Jake (Joseph Clayton). It’s a tightly-written three-way farce that combines quick-fire yet naturalistic dialogue with Paul Schlesinger’s deft direction, a perfectly paced mini drama with not an ounce of flab.

Shappi Khorsandi’s Nina’s Not Okay features Amber Muldoon as a 17-year-old girl who scoops up the male crumbs left by her glamorous friend Zoe – “I make a pretty decent Plan B,” she admits. Already “half off my face” from the vodka and orange juice she swigged from an Evian bottle on the bus, she’s kicked out of the nightclub after an act that’s rather too public. Funny, touching and realistic, with a poignant twist.

Three generations of women sit on a sofa watching the royal wedding in Wellington, by Scarlett Curtis. With some witty dialog – “He looks like he died at the last royal wedding, and they’ve kept hm under a bed ever since” – it’s a brief study of feminism and girl power through the ages. Fun, if somewhat inconsequential.

James McDermott’s Mixed Up stars Will Howard as Adam, a young man who meets the girl of his dreams at an 80s themed party. Before long they’re recording each other mix tapes in true 80s fashion; but what happens when Eve realises she’d rather be Steve? A tight, funny and revealing monologue.

A Selfish Boy by Christopher Reason features Chris Larner as a man in his late 50s recalling his final conversation with his mother (Hilary Greatorex) thirty years earlier. “Are you getting enough roughage?” she fusses, as he prepares to go back to university. “And did you read that leaflet I picked up at the doctor?” A poignant, time-travelling concoction of secrets and lies, performed with restrained passion.

With thoughtful pacing and good writing, this exhilarating mini-festival leaves you with the feeling of having ploughed your way through a nine-course tasting menu. Not all of the dishes are of equal merit, but the overall balance is thoroughly satisfying. Special kudos to Denise Brentall, the stage manager, who deftly oversees eight complete scene changes in record time.