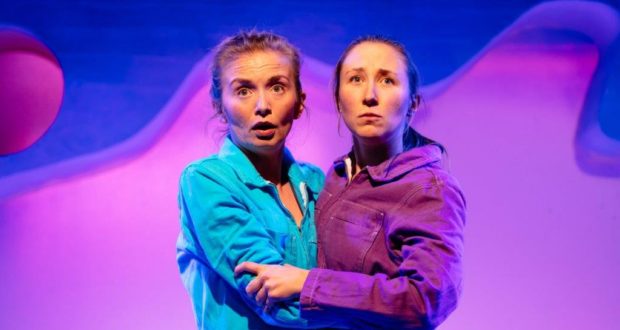 Nothing can quite prepare you for the full-on attack that Wolfie delivers.&nbsp;From the moment the twins burst into the world from the womb they have been dancing and floating in whilst the audience take their seats, they tell their story at double fast speed, words tumbling out so fast it’s a wonder that A and Z (for those are their given names) can keep up with themselves. It’s absolutely exhausting to watch, exhausting in an amazing and exhilarating way. It’s also enchanting, treating the tough subject of adoption and fostering of children with the love and attention such children&hellip;

The subject of the care system may not seem the most cheerful of topics, but in Wolfie it is given the most unique treatment, meaning there is as much laughter as there are tears. Absolutely unmissable.

Nothing can quite prepare you for the full-on attack that Wolfie delivers. From the moment the twins burst into the world from the womb they have been dancing and floating in whilst the audience take their seats, they tell their story at double fast speed, words tumbling out so fast it’s a wonder that A and Z (for those are their given names) can keep up with themselves. It’s absolutely exhausting to watch, exhausting in an amazing and exhilarating way. It’s also enchanting, treating the tough subject of adoption and fostering of children with the love and attention such children need and deserve but are all too often failed.

A and Z are “da Shaky twins”, they tell you that as they wait to escape the confirms of their mother’s womb. A is a bundle of energy, Z is more studious. But they are both excited to be coming into the world, planning their lives already, how they will be together forever. Except that their story is changed forever from the very start, the perfect life they dream of shattered instantly as their mother gives them up for adoption. The girls are separated, and their single story suddenly becomes two.

As the story divides, they take it in turns to tell their separate tales, pausing at times to argue about whether to go on or disagree on whether they are telling it right, each playing the various characters to complement one another’s story. It soon delves into fairy-tale territory as A is rescued by a wolf and raised in the forest. Like all good fairy-tales, metaphors are everywhere: the wolf is the foster parent who allows A to run wild, the trees that watch over her and provide advice and guidance are the social workers, and the woodpecker that finally sends A into the world, alone, scared, ill-prepared for life as an adult, is the leaving care co-ordinator.

Our other child, Z, her story is more conventional, raised by her adopted mother but without love, seeking attention in other ways instead, becoming just another statistic, her potential unfulfilled. It’s the perfect argument of nature verses nurture, with the added confusion that the nurture for A is brought about by nature itself.

What makes Wolfie the perfect piece of theatre is the sum of its parts. The writing is incredible, more so when you realise this is Ross Willis’ first full length play. There is a playfulness that makes it sound so fresh. It’s told like a fairy-tale, albeit not one you are going to tell your children, at least not without editing out all the swearing first. There is humour everywhere, both in the girls’ story and the way it is told.

This is made possible by the creative pairing of director Lisa Spirling and Movement Director Belinda Lee Chapman, managing to not only bring to life Willis’ words, but also that playfulness. In the small confines of Theatre503, they uses every inch of not just the stage but the audience as well. As for the actors, Erin Doherty and Sophie Melville, they bring not only A and Z to life, but all the other characters that form their story, never faltering or pausing for the best part of two hours, it really is a wonder they don’t collapse come the end.

Combining all the elements really does make Wolfie something special. With a subject matter that could be quite desolate, instead it is a pure joy to watch it all come to life in and around you. But even with all the laughter there is tears, as we witness a care system that can fail children, casting them out into the big bad world totally unprepared.

Wolfie is a play that is surely destined for a longer life than its few weeks at Theatre503, and one that will remain forever in my memory.