You can use WP menu builder to build menus
Home » Reviews » Drama » We Know Now Snowmen Exist, The Space – Review 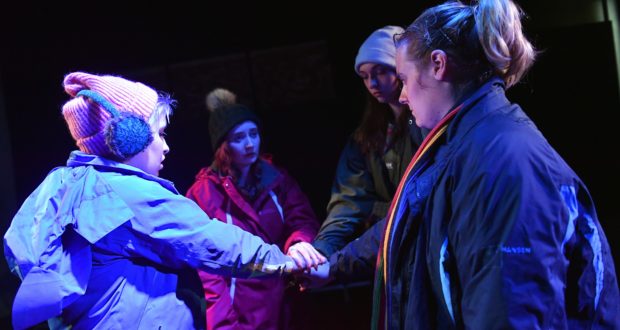 We Know Now Snowmen Exist takes its inspiration from real life, if very loosely. In 1959 nine people died during a trek in the Dyatlov Pass, Russia, in some very strange circumstances indeed. It’s an incident that has become so infamous that Dyatlov Pass is even named after the leader of the hike.&nbsp;It’s an incident that has been the source of myth and speculation ever since.&nbsp; Writer Michael Spencer clearly loves a horror yarn, transferring the story from Russia to Scotland, and instead of what would have been an unmanageable nine bodies, reduces it to five.&nbsp;The one thing that&hellip;

A nice balance of tension and humour allows this show to draw you in and leave you questioning its ending long after our five heroines head to their foretold deaths.

We Know Now Snowmen Exist takes its inspiration from real life, if very loosely. In 1959 nine people died during a trek in the Dyatlov Pass, Russia, in some very strange circumstances indeed. It’s an incident that has become so infamous that Dyatlov Pass is even named after the leader of the hike. It’s an incident that has been the source of myth and speculation ever since.

Writer Michael Spencer clearly loves a horror yarn, transferring the story from Russia to Scotland, and instead of what would have been an unmanageable nine bodies, reduces it to five. The one thing that stays true between real life and fiction of the show is that everyone ends up dead, and we are left to ponder the reasons behind this.

But before we reach the already known ending, we are treated to some superb exchanges between our five soon-to-be victims, each revealing their typical teen issues; boys, sex, religion, alcoholism, depression, self-harming and suicide all get an airing. By regularly pairing girls off as they go in and out of the tent, each character is slowly revealed as they share their secrets and fears with one another. It’s funny, charming and well written, even if it gives just a little too much information on girls’ weeing habits.

But this isn’t a drama about the intimacies of five girls being alone on a mountain. This is a psychological thriller. So, it needs some tension, some edge of the seat moments. Thankfully it delivers on this as well. The tension is slowly ramped up as the girls lose radio contact with the outside world, and they start receiving the same signal over and over. Then after a short release it builds again towards it dramatic and creepy ending. It clearly owes a heavy debt to M. Night Shyamalan’s best works, a slow build up to a twist that you will not see coming, but with plenty of little hints along the way. And like the best Shyamalan movies, come that final twist, you want to watch it again to check how you missed all the obvious clues.

What does let the show down is its staging: setting it in the round may give the intimate feel of a camp site, but it also means you spend the whole time with at least a couple of the five-strong cast with their backs to you. This has the downside of missing some of the dialogue as well as some of the more subtle moments, those little gestures and looks at one another, and the handing around of the she-wee. Rather than sitting tense in your seat as the atmosphere darkens, instead you’re straining to try to make sure you don’t miss something due to the slightly muffled dialogue. What is gained by the camp site feel is not enough to justify the downside of it. Maybe most criminal of all, come the creepy ending, the strength and tension is lessened for those sitting on one side of the venue, as, without giving too much away, you really need to be sitting head-on to the white screen for full creepy effect.

Faults aside though, what demonstrates such promise for this show is that come that ending, even knowing their fate from the very start, it’s still heartbreaking to see them step out of their tent to certain death. Having been privy to such intimacies with these girls you really pray they survive, when all along you know they won’t.