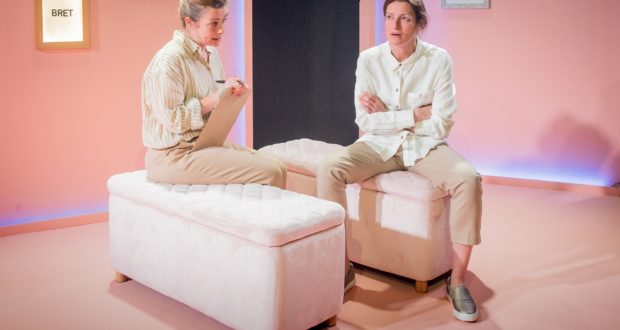 Mary’s Babies is inspired by true events.&nbsp; From the 1940s through to the early 60s, Mary Barton and Bertold Wiesner ran a London-based private fertility clinic.&nbsp; Medically ground breaking at the time, they assisted in the conception and birth of well over a thousand children, known collectively as the ‘Barton Brood’.&nbsp; At the time, there was no statutory framework covering such procedures and with the clinic insisted upon absolute secrecy, all records were destroyed.&nbsp; Regulations were introduced in 1990 whereby donors could only provide samples for up to ten families, but by then it was too late for this&hellip;

Interesting introduction to a rather bizarre real life situation which may affect several hundred people. Written with sympathy and humour, but it was too short a time to explore the questions raised in any great depth.

Mary’s Babies is inspired by true events.  From the 1940s through to the early 60s, Mary Barton and Bertold Wiesner ran a London-based private fertility clinic.  Medically ground breaking at the time, they assisted in the conception and birth of well over a thousand children, known collectively as the ‘Barton Brood’.  At the time, there was no statutory framework covering such procedures and with the clinic insisted upon absolute secrecy, all records were destroyed.  Regulations were introduced in 1990 whereby donors could only provide samples for up to ten families, but by then it was too late for this clinic with its very small pool of sperm donors.  A scandal broke when it was discovered that one of its donors may have fathered up to 100 children.  However, that pales into insignificance compared to Bertold Wiesner, who is believed to have provided most of the sperm used himself.  It’s been estimated he may well have been the donor for over 600 babies.

This play explores some of the possible consequences of having so many half siblings of a similar age and who are likely to be in a fairly small geographical area.  It also touches on other, related questions, such as nurture vs nature, feeling ‘different ‘ and the importance of family.

The plain, almost stark, set and minimal number of props allows the audience to concentrate entirely on the dialogue and action.  Just as well, as some degree of concentration is required to keep up.

The play opens with Kieron, one of the Barton Brood, giving a eulogy for his adoptive mother.   Research into his family has led him to the fertility clinic and a personal project to track down as many of his half siblings as he can.  We meet a fair few of them in a succession of short scenes over the ninety minute duration, with no interval.  Although we only ever really get a glimpse of each person, and as with any extended family there’s quite a variety.  Some appear likeable, others not so much, whilst some are just plain annoying.

The cast of two, Emma Fielding and Katy Stephens, do sterling work playing 41 characters, using body language, voice and accent to distinguish between them.  It helps that the names are lit up on the back wall, but it’s still a bit relentless nonetheless, and it’s impossible to stop some of the characters morphing into one another.

I confess to still being a bit bewildered by some scenes.  Why was there a ventriloquist?  It certainly wasn’t to showcase a particular skill of the cast.  And, what was the point of the chocolate loving chickens?  I can’t decide if these things were added as padding, or whether something was cut and these scenes remained as leftover residue.

Overall though its hard not to feel that Mary’s Babies was an interesting situation, dealt with sympathetically and with humour.  Too much was packed into the time available to explore any single aspect in any real depth, nor to enable any significant character development.  It would though lend itself to a long running TV series so we could get to know the personalities better and allow all sorts of plot twists.