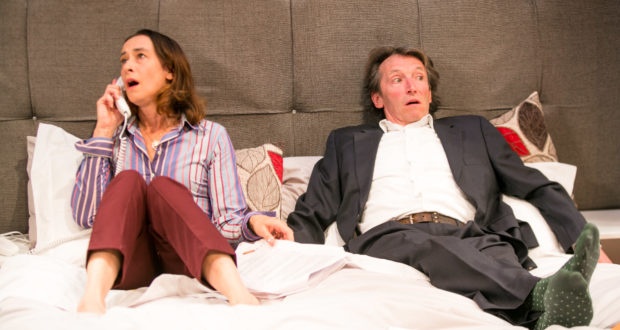 Cons: The script hovers between sitcom and kitchen sink drama, thus denying the extra kick to get it over the line.

Pros: Reassuringly sound performances from Amy Marston and Peter Hamilton Dyer in the title role. Cons: The script hovers between sitcom and kitchen sink drama, thus denying the extra kick to get it over the line. The pre-show blurb looked immediately promising; she's been disruptive in class. She's rude to teachers. And now she wants to learn the trumpet. Take out the bit about the trumpet and you've just described every child that's ever walked the earth. Yes, we're in the right territory for a cracking good yarn. Add to the mix a play from the pen of Bathsheba&hellip;

Strong performances illuminate a script that promises more than it delivers.

The pre-show blurb looked immediately promising; she’s been disruptive in class. She’s rude to teachers. And now she wants to learn the trumpet. Take out the bit about the trumpet and you’ve just described every child that’s ever walked the earth. Yes, we’re in the right territory for a cracking good yarn. Add to the mix a play from the pen of Bathsheba Doran (of American Boardwalk fame) at the excellent Jermyn Street Theatre and all would be set fair. As always, great sight lines bring the audience up close and personal to the action as the focus falls on the parents’ bedroom.

Act I gently sets the scene, as Mother (Amy Marston) and Father (Peter Hamilton Dyer) play a forty-something couple stressing about 10 year old daughter Jessica. They’re bracing themselves for parents evening and the signs are not good. She has been leading other pupils astray and talking back to her teachers. Mother and Father have their own issues too; he’s a novelist with writer’s block and up against a deadline; she is a high flying lawyer looking for a partnership. They fear the evening will expose their own shortcomings as parents and reveal chinks in their own relationship. Act I skips along with a pleasantly light touch, assuming a jovial sitcom mode.

Act II begins with the aftermath of parents’ evening as Mother and Father digest some shattering revelations. This is where the script bears some inconsistency.  Act I contained a smattering of amusing lines and set the tone at a comfortable level. However, Act II abandoned all levity for heavy drama. It gives the story a slightly uneven feel; and would have been wiser to preserve a light touch across the piece. Or, if pure drama was the intention then go with that from the beginning. So it became not so much a game of two halves, but a play of two acts.

Our children are a product of the environment we create and become an extended version of ourselves. The play cleverly plugs into the creeping insecurity all parents feel when their children’s behaviour is discussed. Guilt and embarrassment is acutely observed and captured by Bathsheba Doran. But the two Acts just don’t marry up and leave us with a disjointed story.  Nevertheless, Parents’ Evening is a solid production and draws charming performances from Amy Marston and Peter Hamilton Dyer.

Previous: People Like Us, Union Theatre – Review
Next: Once the musical, Queen’s Theatre Hornchurch – Review