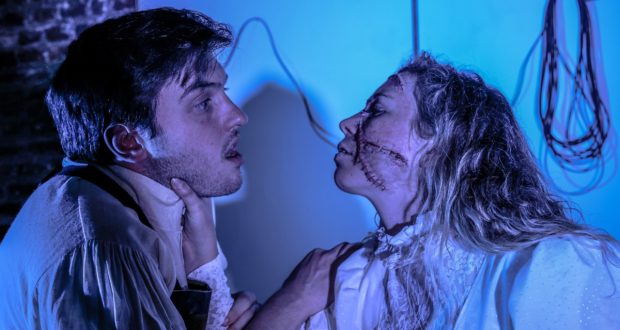 Pros: An atmospheric venue Cons: Overly long and complicated I wanted to love this show. An immersive, feminist interpretation of Mary Shelley’s Frankenstein, set in a 15th&nbsp;century Tudor House and former squat in Hackney? Sounds awesome. Unfortunately, Tea Break Theatre have set themselves a challenging brief, and don’t manage to live up to the enticing premise. The venue, Sutton House on Homerton High Street, is fascinating. Original Tudor oak panels share wall space with anarchist murals painted by activists who squatted the building during the 1980s. It’s also huge. And cold. Following characters up and down the stairs and&hellip;

This feminist reworking of Frankenstein tries too hard with a laboured concept and misses opportunities for both theatricality and scares.

I wanted to love this show. An immersive, feminist interpretation of Mary Shelley’s Frankenstein, set in a 15th century Tudor House and former squat in Hackney? Sounds awesome. Unfortunately, Tea Break Theatre have set themselves a challenging brief, and don’t manage to live up to the enticing premise.

The venue, Sutton House on Homerton High Street, is fascinating. Original Tudor oak panels share wall space with anarchist murals painted by activists who squatted the building during the 1980s. It’s also huge. And cold. Following characters up and down the stairs and shivering in the courtyard for outdoor scenes won’t be suitable for everyone. Wear sensible shoes, dress warmly, and don’t bring bags.

Upon entering each audience member is given a coloured wristband, and at certain points you follow the character who is holding a ribbon of your colour. When a character holds a white handkerchief, it means everybody should follow. This was explained during a confusing opening scene set in the 80s squat, denoted by a few blankets and sleeping bags, and the actors portraying sketchy characters who had all had the same creepy dream which alluded to… you guessed it, Mary Shelly’s Frankenstein.

Writer/director Katherine Armitage’s stated aim is to reclaim the female characters in the story, so Justine (Katy Helps) became a steely scientist, whose research is stolen by Victor Frankenstein (Jeff Scott) and employed in his maniacal attempts to bring his monstrous creature to life. Frankenstein’s monster (Molly Small) is also female, which resonates with certain lines in the text, and the monster’s longing for a family. Ana Casquinha’s make-up design gives her face convincingly gory stitching and scarring, which is great to see up close. But disappointingly there’s nothing in Small’s physicality which marks this creature as different from the other characters, all of whom look physically stiff and inhibited in the large space. When Justine discovers that Victor has stolen her precious work, she barely reacts. There are numerous moments like this when opportunities to respond to one another and make bolder theatrical choices are missed by the actors.

Jennifer Tyler as Elizabeth is a notable exception, who succeeded in bringing some light and shade to the thankless part of Victor’s obedient wife, and herein is part of the problem. Armitage’s attempts to draw out the female characters fails because Shelley didn’t write very interesting female characters in Frankenstein. What she did create was a richly evocative story, which was obscured in this production. The link to the 1980s activists is flimsy and confusing, and the piece would probably be stronger without it.

There are some inventive design touches – such as the stench of disinfectant in Victor’s laboratory – but following the actors from room to room doesn’t really add anything, as each scene is played statically, often with painfully long pauses between entrances and exits. It was early in the run of course, and I’m sure the pace will pick up. I certainly hope so – the running time of over two hours was excessive.

Overall, there’s a lack of coherence in the immersive concept, which shows up most strongly in the ending. Throughout the production, actors observe the fourth wall, and the audience adheres instinctively to this convention by remaining mute, passive spectators of each scene. But at the end the monster addresses the audience directly, screaming at them for failing to intervene, and accusing them of being compliant in her downfall. It sits oddly with the rest of the piece and feels like a rather manipulative, last ditch attempt to insert some drama. Frankenstein’s monster screamed at us to get out and we did, shuffling cold and baffled back onto Homerton High Street.