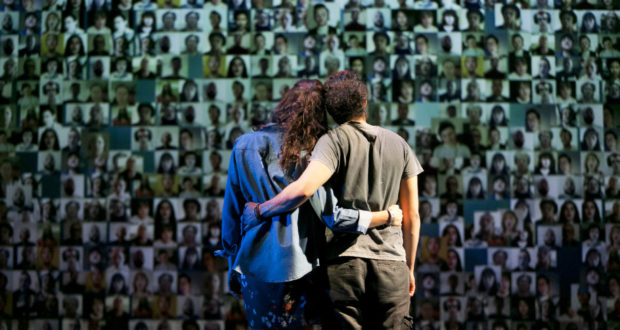 Cons: With so much going on visually and sonically, the text felt unnecessarily wordy sometimes.
Adam, Battersea Arts Centre – Review

Pros: Visual alchemy - the production design and Grand Hall setting combined to create delightful thematic echoes that enhanced the whole experience. Cons: With so much going on visually and sonically, the text felt unnecessarily wordy sometimes. At last summer's Edinburgh Fringe, I was sad to miss Adam in its first triumphantly sold out run, but now I'm glad I had to wait. From Egypt to Glasgow, from Woman to Man – seeing this global transgender odyssey in the newly reborn Grand Hall, as part of the BAC's Phoenix season, was a treat and a half. The parallels between&hellip;

A visually compelling, fiercely moving play about truth, destruction and renewal - with the added bonus of being performed in a space that has known all three.

User Rating: Be the first one !
At last summer’s Edinburgh Fringe, I was sad to miss Adam in its first triumphantly sold out run, but now I’m glad I had to wait. From Egypt to Glasgow, from Woman to Man – seeing this global transgender odyssey in the newly reborn Grand Hall, as part of the BAC’s Phoenix season, was a treat and a half. The parallels between man and building were beautiful. Two souls that had weathered life, and been weathered by it; a personal story as raw as the fire-damaged walls which remain part of the new building. Alongside the excitement (new hall! Press night!) before the show began, there was a tang of awe that such rebirths were possible.

Adam is a man, inside the body of a woman, in a society where even talking about such things is dangerous. The play charts how he discovers, and then follows, what he knows to be the truth about what he is. It isn’t easy. The writing is sharp – unapologetically showing complexities of Adam’s predicament through contranyms (single words with two opposite meanings: sanction, cleave, apology and so on). By contrast, Adam’s role is shared by two people: Adam Kashmiry himself, and the sparkling Rehanna Macdonald as ‘Princess’ – Adam in his pre-transition body. They’re always fighting, but they know and trust each other as well as close siblings might. Princess is far from the ‘baddie’ of the piece either: from the play’s first image, we’re on her side despite knowing that Adam can only be freed by her ‘death’. Complicated.

In Adam’s world, there’s a constantly uneasy relationship between surface and substance. The shiny flagstone floor of Emily James’ ingenious set hides all manner of props packed with meaning – two [non gender neutral] toilets, a bed, a soiled party dress. The playing space is an island with a mass grave of mannequin limbs stacked underneath, simultaneously haven, battlefield, and prison. Pre-transition Adam is trapped, but also lost in a big, violent world that won’t see him as he is. It is only in the digital realm that Adam finds any freedom or solidarity at first. The magic and relief of that moment is clearly shared with us all thanks to Jack Henry James’ projection design.

Alongside all the angst are lighter moments that entertain while highlighting pertinent issues: from common misconceptions about trans men to what kind of refugee stories count as ‘credible’, to the dangers of hormone therapy. Other powerful moments arise through projection and sound: graphic footage and noise of rioting and self-immolation from the streets of revolution-racked Cairo distances Adam from his ‘brothers and sisters’. In Glasgow he waits, guilt-ridden, for asylum under beeping surveillance cameras. In fact the images were often so eloquent that Adam’s additional spoken commentary felt unnecessary, well written though it was.

Adam’s story is set out like some kind of twisted fairy tale. The hero escapes oppression, fights hardship to find a new home, and becomes the man he always knew he was. The Adam World Choir’s voices soared in beauty and solidarity to close the show like a host of digital archangels. But, it was telling that the most suspenseful, gut-wrenching moment was a simple Skype call between Adam and his mother. Would she accept him as He is? Would she forgive him for leaving? Would she call him Adam? Along for the ride on Adam’s journey it is so easy to forget how important acceptance is to human beings. As important as freedom – almost.