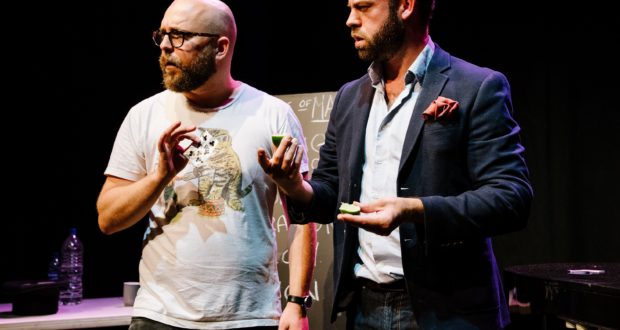 Cons: Those who are led to believe that there will be a vanishing act performed on stage might feel disappointed.
The Vanishing Man, Pleasance Courtyard (Pleasance Two) – Review

Pros: Simon Evans’s close-up magic tricks are brilliant. Cons: Those who are led to believe that there will be a vanishing act performed on stage might feel disappointed. Drawing from the life of Edwardian magician Hugo Cedar, theatre veterans Simon Evans and David Aula try to deconstruct on stage with The Vanishing Man the greatest magic trick ever performed and never revealed. In the early morning of June 20th 1930, Cedar stood silent and motionless on London Bridge for over three hours, surrounded by many onlookers who suddenly saw him vanishing into thin air. The magician never reappeared or&hellip;

An interactive piece enriched by well-polished acting and show-stopping magic.

In the early morning of June 20th 1930, Cedar stood silent and motionless on London Bridge for over three hours, surrounded by many onlookers who suddenly saw him vanishing into thin air. The magician never reappeared or gave news of himself. How did he do it? Was that true magic or a mere illusion? Did he have any accomplices?

Approaching the subject with a pseudo-scientific method and heavily relying on audience participation, Evans and Aula dissect the episode and the events that surrounded it, supporting their theories with a display of fine magic numbers. An award-winning magician, Evans wows the audience with his impressive sleight of hand and his slick card tricks, which leave even the more sceptical spectators very impressed.

At one point, a scale model of the “New” London Bridge is brought onto stage. The original was built in 1831 and included several trapdoors which, however, could only open outwards and, therefore, couldn’t have facilitated the magician’s escape. The same bridge was then bought by an American tycoon in 1967 and subsequently moved, stone by stone, to Arizona, whilst being replaced in London by the current one.

The Vanishing Man is an amiable afternoon show, which receives a great response from the public and wins its stars for the dexterous execution delivered by its creatives. It is closely tied to the second play offered by the duo, The Extinction Event, running back-to-back in a different space of the Pleasance Courtyard.

The intention of enticing the audience to stay for the following show could be the main reason behind the cliff-hanger finale, which doesn’t reveal anything new about the trick of the vanishing man, nor attempt to replicate it on stage. Other than a great marketing strategy to keep the audiences keen, this anticlimactic conclusion might feel disappointing to those, like me, who can’t join the pair for one more hour and are left with the unsatisfied desire to see yet one more show-stopping illusion.