You can use WP menu builder to build menus
Home » Reviews » Drama » For King and Country, Southwark Playhouse – Review 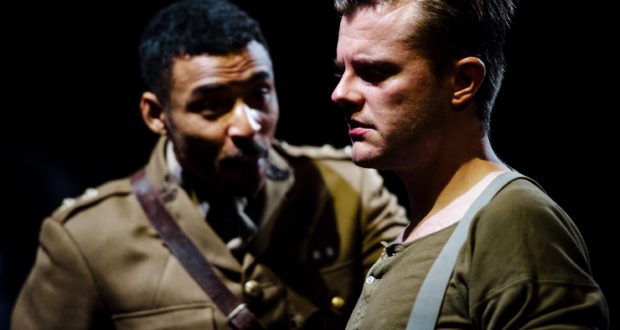 Pros: The cast can sustain tension and passion; it is genuinely moving to watch this less-discussed side of WWI history.

Cons: A stiflingly hot venue makes several audience members lose concentration; due to the thrust stage, some lines are hard to hear when actors aren’t facing you.

Pros: The cast can sustain tension and passion; it is genuinely moving to watch this less-discussed side of WWI history. Cons: A stiflingly hot venue makes several audience members lose concentration; due to the thrust stage, some lines are hard to hear when actors aren’t facing you. At the end of this month, it will be 101 years since the Battle of Passchendaele began. It lasted until November 1917. Unlike the current British heatwave, Passchendaele started with heavy rainfall, turning the battlefield into a place where you could literally drown in mud. Many did. John Wilson’s play, originally called&hellip;

The perfect time to revive John Wilson’s emotive WWI drama, exploring one man’s desertion and the evolution of shell shock as a diagnosis. An engaging cast and inventive set design add to the atmosphere.

At the end of this month, it will be 101 years since the Battle of Passchendaele began. It lasted until November 1917. Unlike the current British heatwave, Passchendaele started with heavy rainfall, turning the battlefield into a place where you could literally drown in mud. Many did.

John Wilson’s play, originally called Hamp but retitled For King and Country, follows Private Arthur Hamp (Adam Lawrence), so traumatised by nearly drowning in a mud-filled shell hole at Passchendaele that he deserts the army ten days later. We see him held to account for desertion, and defended in an army court by Lieutenant Hargreaves (Lloyd Everitt, electric to watch) who happens to be a trained lawyer.

The set (designed by Jacqueline Gunn) balances orderly army precision with Flanders chaos: a table and chairs on duckboards give way to an uneven panel of moody drawings, plus war-addled branches studded all around, some behind the back-row seating. The thrust stage set-up immerses you further into the action, despite some lines misfiring when spoken to only one part of the audience.

Hamp doesn’t give much away, and that’s part of his problem, as the more eloquent and insightful Hargreaves quickly discovers. Hamp is just a run-of-the-mill bloke, slightly dull but well-meaning, described as a ‘gormless bastard’ by another soldier. You couldn’t pick him out in a line-up, yet – by some twist of fate – Hamp has survived the war largely unscathed since 1914. Sadly, he doesn’t quite understand the gravity of the situation and can barely explain how or why he ran away, let alone what it’s like to watch men die around him day after day, year after year, and the cumulative effect that would have on his own psyche; occasional interspersed flashbacks help unpick this. Director Paul Tomlinson doesn’t overload the actors, but the dizzying flashbacks cleverly counteract the formal interviews and court testimonies.

Over a century later, we’re well aware of PTSD, but shell shock diagnosis (the equivalent in those days) was in its infancy. Many doctors and senior army staff didn’t believe in it, or simply worried that men with severe ‘nerves’ would dampen morale for other troops, in a sort of domino effect of increasing doom. Medical Officer O’Sullivan, whose sneery tone is communicated nicely by Andrew Cullum, is one such sceptic. He has his own narrow definition of shell shock, which Hamp doesn’t fit, therefore Hamp must be lying or exaggerating. In contrast, the Padre (a delicate Eugene Simon) can see something’s wrong with both Hamp and the wider system.

Though it’s hard-hitting stuff, there are lighter moments in the script, and we get a sense of the men’s camaraderie (yet a few throwaway lines about heat fall too close to home in this mid-heatwave production; some discreetly-placed silent fans wouldn’t go amiss in the space).

This is a tight and impactful production, supporting the British Legion and as part of the Imperial War Museum Centenary Partnership. In telling one man’s story, it tells that of thousands more. Now that we’re so much more aware of mental illness, and it’s well known that one in four of us will suffer a mental health condition in our lifetime, with young men particularly vulnerable, there’s great poignancy in the Padre’s line: ‘How frail and uncertain our own condition is’. How frail indeed, but how important to keep talking about it, and to honour those real-life Hamps a century on from their distress – lest we forget.