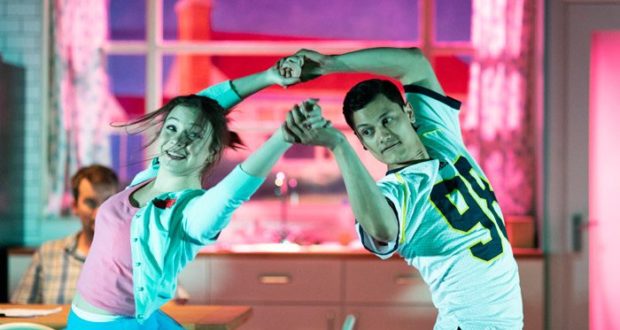 Pros: A visually compelling piece of theatre, with strong performances from the cast and moments of dark comedy.

Cons: There is a confusion surrounding the portrayal of the domestic couple that stifles the show from finding its meaning.
Blueberry Toast, Soho Theatre – Review

Pros: A visually compelling piece of theatre, with strong performances from the cast and moments of dark comedy. Cons: There is a confusion surrounding the portrayal of the domestic couple that stifles the show from finding its meaning. The stage, before it is populated with actors, is a picture-perfect scene. A kitchen worthy of House &amp; Home: pristine counter tops and shiny linoleum floors. It’s the kitchen of Betty Crocker’s dreams. You think you’re in the fifties, except apparently even the fifties cannot escape the omnipresent Taylor Swift, whose ‘Look What You Made Me Do’ is playing on the radio.&hellip;

The stage, before it is populated with actors, is a picture-perfect scene. A kitchen worthy of House & Home: pristine counter tops and shiny linoleum floors. It’s the kitchen of Betty Crocker’s dreams. You think you’re in the fifties, except apparently even the fifties cannot escape the omnipresent Taylor Swift, whose ‘Look What You Made Me Do’ is playing on the radio.

Enter Walt (Gareth David-Lloyd) and Barb (Gala Gordon), and the archetype of traditional domesticity is complete. What then ensues is the downfall of their marriage, all poised around Barb’s insistence on Walt trying her breakfast special, blueberry toast. Walt really does not want to try said toast. I think he’s mad, it looked great, and a ton of it went to waste in the bin…

Mary Laws’ Blueberry Toast hinges on a stereotype, the Betty and Don Draper marriage of Mad Men, to explore notions of patriarchal control within marriage. Walt is a simpering, thoroughly dislikeable man. The problems in their marriage don’t creep into the narrative, they enter stage right as soon as the characters open their mouths. Conventionalism is asserted just as loudly, forming an oppressive domestic environment that Barb just cannot stand: hence the heavy dose of “yes, Dear”, used as punctuation throughout.

The clever aspects of the play, which are complemented by David-Lloyd and Gordon’s performances, work around this passive aggression. Walt’s stubbornness is met with Barb’s measured tolerance: her anger bubbles under the surface until the final twenty minutes, when the gloves (and several body parts) are off. Expect much, much blood.

Blueberry Toast is a witty and gripping take on American consumer culture. The portrayal of domesticity feels slightly outdated, but the message about commercialism, especially in America, and its ability to stagnate a culture that should be moving forward, rings relevant and true. Barb and Walt’s family is complete with two children, Jack and Jill, played by (grown-ups) Adrianna Bertola and Matt Barkley. The two occasionally burst on to the stage to show off their four-act-play. The interruptions are a welcome change from the depressingly dry humour of their parents.

The action was complemented by some wonderful sound and lighting design (by Mic Pool and Rob Casey). Never has the shutting of a bin lid sounded so apocalyptic. The lighting during Jack and Jill’s darkly funny dance showcase gave the scenes the cinematic look of American Beauty, in fact many aspects of the play feel akin to the film. Similar ideas about power are explored.

The show is quite engaging and visually impressive. However, it sort of makes its point within the first few minutes. It’s a show that functions around an atmosphere but seems to struggle to find some harmony. There are some funny moments, and some really gripping moments, but the in-between is a little lacklustre. The couple are sent on their path to marital doom from the outset, and we never get to see the journey that leads Barb to snap. The only thing that asserts the issues between them is this blueberry toast incident, which is used as an emblem for all of this ingrained misogyny that Barb has put up with, but how did they get there?

Steve Marmion directs a thought-provoking play, with many of the elements of a great show, yet Blueberry Toast doesn’t find its feet. The play doesn’t seem to take its comments on the present day entirely seriously. Barb is seeking revenge for an oppressive, stifling domestic environment, but she also seems to play the part that she is contesting quite comfortably. There’s no hope for the heterosexual couple in this representation of it: it’s all blood and doom.