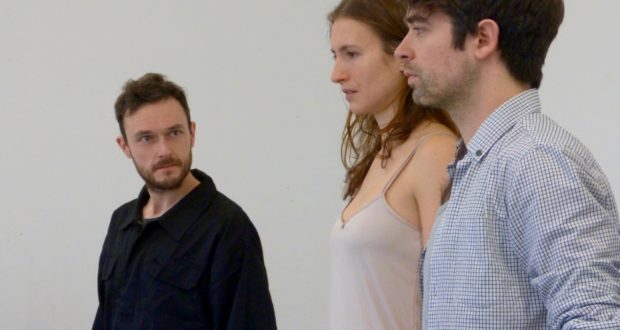 Cons: There’s not much plot to speak of; the creative team have completely overshot their aim of ‘interestingly esoteric’ and firmly landed in ‘what on earth is going on’ territory.
Tomorrow Creeps, The Vaults – Review

Pros: I’ve never seen a show make better use of The Vaults’ uniquely ominous vibe. Cons: There’s not much plot to speak of; the creative team have completely overshot their aim of ‘interestingly esoteric’ and firmly landed in ‘what on earth is going on’ territory. If you’re an audacious small theatre company, there’s no better place to be this time of year than the VAULT Festival. As such, I was unsurprised to encounter mash up wizards GOLEM! among the line up. Specialists in repurposing and reimagining existing plays, with Tomorrow Creeps they have embarked on their most ambitious project to date:&hellip;

An admirably ambitious experiment in reimagining Shakespeare that mostly misses the mark.

If you’re an audacious small theatre company, there’s no better place to be this time of year than the VAULT Festival. As such, I was unsurprised to encounter mash up wizards GOLEM! among the line up. Specialists in repurposing and reimagining existing plays, with Tomorrow Creeps they have embarked on their most ambitious project to date: a new play created by mixing and matching parts of sixteen works by William Shakespeare.

I’m all for repurposing Shakespeare but, as the word repurposing implies, I would like there to be some sort of point to doing so. There’s no doubt that playwright David Fairs has pulled off an incredibly impressive feat: making up an entirely new play out of existing quotes is a remarkable achievement. The problem is that so much of his energy seems to have gone into stitching the various bits and pieces together into somewhat sensible dialogue, that he completely forgot to add a plot. The result feels more like an exercise in technical virtuosity than a play.

That’s not to say that there isn’t a lot going on, because oh boy, there sure is. The Fallen Tyrant (also played by Fairs) is locked away in a dungeon by the Hollow Hero (Conor O’Kane). The hero needs the tyrant’s help with something; thanks to a combination of the space’s challenging acoustics and director Anna Marsland’s decision to play some scenes facing away from the audience, I couldn’t tell you what exactly that is.

In any case, it leads to some serious invoking of supernatural forces: candles, fake blood, the whole shebang. The ghost of the tyrant’s dead wife (Zena Carswell) also gets in on the action, then turns out to be possessed by the mythical witch Hecate. Cue more candles, a massive salt circle and the reciting of Sonnet 130. Oh, and there’s also some Kate Bush. At the end of the 60-minute show, most audience members who filed past me on the way out seemed to be in varying states of bewilderment, while one poor gentleman displayed the kind of distressed confusion usually only seen on tourists trying to make sense of the Northern line.

There are definitely elements to be enjoyed in Tomorrow Creeps. The designers have made the most of the already slightly creepy atmosphere of The Vaults and enhanced it with theatrical but elegant lighting and an unnerving sound design, courtesy of Odinn Hilmarsson. The cast really give it some proper welly too; if you’re going to put something on that’s this unashamedly obscure, you have to go hard or go home, and they certainly don’t hold back. There’s even a surprisingly self-aware scene in which the tyrant and his queen share a hilariously overwrought moment to the sounds of Kate Bush’s ‘Wuthering Heights’ (although we’re straight back to flamboyant mysticism as soon as the song ends). And some of the recontextualising of the original writing is genuinely enjoyable and clever; you can hit me with a “frailty, thy name is man” any day.

All in all, there is a lot of talent on display here. Unfortunately though, I don’t think Tomorrow Creeps is the right outlet.