You can use WP menu builder to build menus
Home » Opinions » How ‘Becoming Shades’ is Bringing Immersive, All-Female Circus to The Vaults 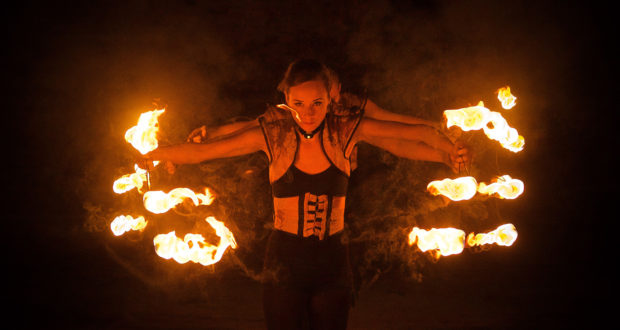 'Becoming Shades' at the Vault Festival

How ‘Becoming Shades’ is Bringing Immersive, All-Female Circus to The Vaults

The circus has made its way to the Vault Festival this year, as Chivaree Circus brings its immersive, all-female production of Becoming Shades to Waterloo. In this guest blog, producer and director Laurane Marchive shares how the company weaved a variety of influences together to bring this ‘strange creature’ of a production to the stage.

When people ask us to describe the aesthetics of Becoming Shades, I find that the simplest way is to say something along the lines of: ‘It’s a blend of pulsing electronic beats and Celtic-infused opera, with Lynchian moments and bad-ass circus.’ That’s an over-simplification – but at least it reflects the great number of influences we have drawn upon to create the show. Becoming Shades is a mix of live music, physical theatre, aerial acrobatics, fire, dance and mime, all tied together through interactive, immersive theatre. There are big, shared moments where all audience members come together to witness a central act, and small, intimate sections for revelers to feel like they are wanderers of an unexplored world.

That’s probably a lot to do in one show – but so far, I feel like we’ve been able to achieve it by borrowing from a lot of different genres and by casting performers from wildly different backgrounds.

I read once in an article that what made Ennio Morricone a soundtrack genius is that when Sergio Leone asked him to compose the music for Once Upon a Time in the West, he decided to go for a pan pipe theme, which really doesn’t seem like an obvious choice. Why the pan pipe? When I hear pan pipe, I am more likely to think of the Andes Cordillera than I am to picture sexy cowboys fighting epic brooding fights. Yet the movie’s music ended up being some of the most recognisable ever written. And it works: it fits. Because sometimes when you start mixing genres and influences, the result ends up being more than the sum of its parts. You find that you have created a chimera, a beast that is spiky and new and unexpected, but endlessly fascinating.

That’s what happened with Becoming Shades. Our primary purpose when creating the show was to weave together an adventure for people to embark on. Something that would engulf them, that would be both classical – it is, after all, a retelling of a Greek myth – and modern, with laser cut costumes and electronic beats; both intimate, with sometimes very little on stage, and intensely cinematic — think strobes, fire, big costumes and circus all happening at the same time. In the end, what we gave birth to is a strange creature that looks you straight in the eyes, swallows you whole and leaves you wondering what just happened. We didn’t want to give audience members clear answers, but rather let them decide for themselves, to leave the story open and multi-angular so that the public could feel they have wandered into a world that, ultimately, belongs only to them.

When we performed Becoming Shades last year as part of the Vault Festival, it sold out and audiences loved it, and the show even won an award. So this year we wanted to return with a show that would run for longer, with a larger cast, more acts and more side worlds. Another new and very exciting addition is that this year the cast is fully female. 2018 is the 250th anniversary of circus and the 100th anniversary of women conditionally gaining the right to vote – and what better way for us to celebrate than to put on a show where a woman’s story is told by solely women themselves? We believe this makes the show more interesting and adds additional layers of meaning. Our wider creative team is largely female, from the lighting designer to the PR team, and our cast is made of some of the most talented performers we have ever worked with. This is not a story purposely without men – a male singing voice still underpins the character of Hades – but it is one that celebrates women with performers who were the best able to tell a story that is ultimately about femininity, love and empowerment.

Becoming Shades is a beast of a thousand worlds, ready to take you on a journey where you can touch, breathe, explore and witness fragments of unreality collide into one another – but with big exciting acrobatics and dangerous feats of exhilarating circus on top. Because let’s not kid ourselves: Who doesn’t want to see their heroine spin high above ground in a ring of fire?

Becoming Shades is playing at the Vault Festival through 18 March.

Previous: The Flying Lovers of Vitebsk, Wilton’s Music Hall – Review
Next: Fuck You Pay Me, The Vaults – Review