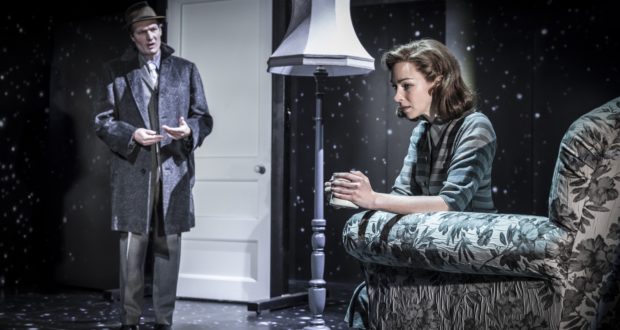 Pros: An absorbing adaptation of the TV drama that translates well to the stage. Excellent costumes and a fun approach to the script, props and set design make it even more likeable.

Cons: Some content is unsettling – the giant baby figure might give you nightmares – and the mash-up of episodes breaks your concentration at times.
The Twilight Zone, Almeida Theatre – Review

Pros: An absorbing adaptation of the TV drama that translates well to the stage. Excellent costumes and a fun approach to the script, props and set design make it even more likeable.  Cons: Some content is unsettling - the giant baby figure might give you nightmares – and the mash-up of episodes breaks your concentration at times. When modern TV goes for special effects galore, it would be easy to dismiss a cult US sci-fi programme from 1959-1964 as being old-fashioned and no longer shocking, however successful it may have been at the time. But the appeal of The&hellip;

A mind-bending, imagination-blowing adaptation of the cult classic TV series, laced with humour and hidden depths; Suitable even for sci-fi refuseniks.

User Rating: Be the first one !
When modern TV goes for special effects galore, it would be easy to dismiss a cult US sci-fi programme from 1959-1964 as being old-fashioned and no longer shocking, however successful it may have been at the time. But the appeal of The Twilight Zone clearly endures, because it’s been lovingly adapted into a stage play that combines age-old fears of the unknown with a very modern cast of creatives at the Almeida.

Anne Washburn, in charge of adaptation, and Richard Jones, who directs, sat through the entire 156 episodes of The Twilight Zone to find the right stories for the stage. Having never seen a single episode myself, and having never really understood sci-fi, I can’t tell you how faithfully Washburn and Jones have covered the eight episodes in this play, but rest assured there are plenty of references to the series’ recurring themes, catchphrases and imagery. The world they’ve conjured is one of spiralling nightmares, trust issues and a fear of being alone, which makes this sound like an awful way to spend the evening, but everything is sprinkled with a wry sense of humour. The play is excellently cast, but Adrianna Bertola and John Marquez are particularly good at wringing the laughs out of their lines. It can be a little difficult to keep up with the chopping and changing of episodes, and the longer sections work best, but stick with it, because all human emotions pop up along the way.

What particularly makes this show shine are illusions, created by two members of the Magic Circle (Richard Wiseman and Will Houston). They’re simple sleight-of-hand tricks, but they never fail to amaze. Characters find the best indicator of the paranormal is that a cigarette suddenly appears in their hand, even though they don’t smoke; the front page of a newspaper has its main photo change in a split second from capturing three, two or just one of the soldiers who’ve been on a strange space mission.  The illusions also add a nice contrast to the deliberately clunky use of star-speckled black aprons, hats and tunics for actors moving scenery, who then lurk in the background during various scenes, trying but failing to blend in.

Some of the dialogue, too, is knowingly funny. On finding their daughter missing in strange circumstances, one parent remarks: “I’m going to call Phil – he’s a physicist,”. My favourite episode adaptation, “The Shelter”, had less of the comedy, as it focused on impending nuclear attack, but it exposed the inherent racism and prejudices many of us still see. Yes, we feel raw after Brexit and Trump and the slow struggle to make people aware that Black Lives Matter, but this is necessary drama for such divisive times, as neighbours try increasingly desperate survival tactics. It’s messy, but totally believable, and Oliver Alvin-Wilson and Franc Ashman both give strong performances.

Costumes for main characers are far more striking, accessorised with coordinating make-up. The opening scene, in an anonymous-looking diner, sees everyone dressed in black and white, occasionally with flashes of mauve, and the women wear mauve-tinged lipstick. For more futuristic later scenes, lipstick is blue or charcoal as they deliver lines about solitude in space – being “in a tin can in a sparkling void”. This slickness is offset by the terrifying masks used in nightmare sequences: a giant baby with an oversized head is particularly disturbing. Somehow, this blend of sophistication and simplicity works.

The Twilight Zone isn’t just for sci-fi fans, and neither is it high or low art. It has a broad appeal and resonance; you’ll leave the Almeida realising how little our fundamental human fears have changed since the 50s and 60s.