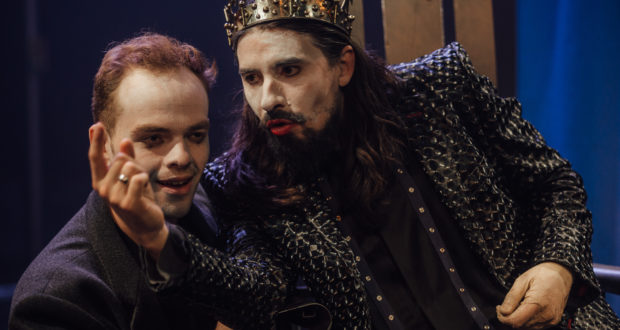 Pros: The opening scene is an unforgettable three-dimensional artwork.

Pros: The opening scene is an unforgettable three-dimensional artwork.  Cons: Nothing significant enough to detract from this excellent production. A chilling soundtrack welcomes me into the Cockpit Theatre's auditorium, reminding me of those tunes that are often on a loop in the DVD menu screen of a thriller film. When everyone is finally seated – an operation that takes an unnecessarily long time, due to the lack of initiative of the front of house team – a recorded voice invites us to switch off our mobile phones and keep our limbs off the corridors.  Before I know it, armed men&hellip;

A chilling soundtrack welcomes me into the Cockpit Theatre’s auditorium, reminding me of those tunes that are often on a loop in the DVD menu screen of a thriller film. When everyone is finally seated – an operation that takes an unnecessarily long time, due to the lack of initiative of the front of house team – a recorded voice invites us to switch off our mobile phones and keep our limbs off the corridors.

Before I know it, armed men and women stream onto the stage from each corner of the room – sixteen of them in total – screaming, brandishing swords and rolling on the floor. The scene, played in the round, freezes repeatedly, giving me the opportunity to familiarise myself with the numerous faces. Gradually, the pressing soundtrack becomes an electronic disco beat and the bloody assault fades into slow-motion choreography. No longer on a battlefield, bodies explicitly entangle on the dance floor, revealing, amongst the horde, the ‘poisonous hunchback’d toad’ who’ll become their king.

This powerful opening scene is only one of the many highlights devised by Australian director and movement specialist Lawrence Carmichael, who demonstrates a clear and elaborate vision of what could be considered Shakespeare’s most blood-drenched tragedy. His confidence and inspired understanding of the work allows him not only to breathe new life into the several familiar scenes but also draw out some of their unexpected comedic potential.

Having seen another commercial production of the same play not long ago, I was pleasantly surprised to find myself and the rest of the audience so visibly amused by the nuanced irony with which Carmichael interpreted the script, which was unseen in my previous experience.

The whole cast seemed well aware of the true meaning of their lines, expressing them with spontaneity and the right amount of emphasis. Except, perhaps, in the case of Angela Harvey, whose pivotal cursing monologue as Queen Margaret was delivered in haste and on a single note.

On the opposite, Kim Hardy offered a sublime portrayal of the title role. Consistent throughout his challenging performance – both on his physical bearing and character development – his presence on stage felt truly menacing and genuinely disturbing. Wearing all-black skinny trousers, casual shoes and a leather waistcoat, he’s a modern punk, surrounded by many characters also dressed in black and their faces painted white, a single black tear marking their lower lids.

Less convincing are the costumes chosen for the female roles, whose heavy boots and flared skirts with a raised hem are a nod to steampunk – a style not at all reflected in the male or gender-neutral outfits.

The leading actor owns the credits as well for the sound design, which, together with Kiaran Kesby’s lighting effects, provide an engaging backdrop for the almost bare set conceived by Amanda Mascarenhas.

Offering some of the most breath-taking fights I’ve ever seen on stage, elements of mime and puppetry, brilliant comedic gems and Hardy’s unforgettable performance, Front Foot Theatre’s Richard III is for sure an unmissable production and one of the highlights in my personal experience. 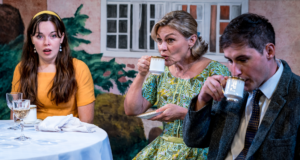