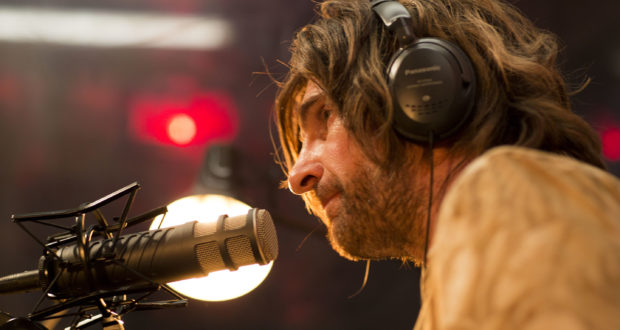 Cons: Pace wanes towards the end and the fans in the venue (although necessary in this heat) are too loud.
Talk Radio, Old Red Lion Theatre – Review

Pros: Strong cast, great script and creative direction. Cons: Pace wanes towards the end and the fans in the venue (although necessary in this heat) are too loud. Going to the Old Red Lion Theatre Pub is always such a treat. Steeped in history, this north London venue is one of the capital's oldest boozers and offers the perfect mix of live music, pale ales and fringe theatre to while away the long summer nights. Their beer garden is one of the best in the area. The theatre itself, situated at the top of some stairs strewn with vintage&hellip;

An energetic and well performed revival of Eric Bogosian's iconic hit which hits all the right contemporary notes.

Going to the Old Red Lion Theatre Pub is always such a treat. Steeped in history, this north London venue is one of the capital’s oldest boozers and offers the perfect mix of live music, pale ales and fringe theatre to while away the long summer nights. Their beer garden is one of the best in the area. The theatre itself, situated at the top of some stairs strewn with vintage play posters, is small and intimate. I had the privilege of seeing Arthur Miller’s lost debut No Villain in this theatre back in December 2015, so was delighted to see that it was the same team behind the pub’s new production – Talk Radio.

Enjoying its London premiere, Eric Bogosian’s Pulitzer Prize-nominated Talk Radio is hard hitting from the off. Exactly thirty years since its inaugural Broadway production at The Public Theater in New York, this new adaptation couldn’t be more timely. The play explores the media’s power to manipulate, narcissism and the not-so hidden prejudices of the American psyche. Sound like someone we know? Bogosian’s play highlights that, in the wrong hands, freedom of the press can be used to baffle and create prejudice. In a post-truth age of fake news and continued attacks against the press, this landmark hit has never felt more important.

As soon as I sat down and saw Max Dorey’s incredible and multifaceted radio studio set, and heard the familiar tune of Madonna’s ‘True Blue’, I knew we were in for a treat. The play’s protagonist is Barry Chamberlain who lives for his radio show and the imaginary god like status it brings him. Barry despises the people he talks to every day; he loathes their views and he abhors their adoration. It’s a tough gig, especially seeing the playwright performed the role himself in Oliver Stone’s major motion picture, but Old Red Lion stalwart Matthew Jure is intoxicating. Jure’s Chamberlain is vile, but damaged. I couldn’t help but sympathise and want to help him sort his inner demons out. Line after hard hitting line, I found Jure’s performance outstanding and unwavering.

The play is fraught with fabulous tension across its two acts, although I do feel this production could’ve been a bit stronger as just one. The cast of only five are incredibly tight and work well together to add and heighten the drama. Both Molly McNerney as the stressed producer and George Turvey as the stoner technician are strong. Andy Secombe as the hapless station CEO is great and Cel Spellman as the crazed unhinged superfan is superb. Sean Turner has directed the cast to perfection, especially in the more frenetic and poignant scenes.

In the age of Trump, Farage, Putin, and daily concerns about freedom of the press, Talk Radio is a must see. Make sure to tune in!