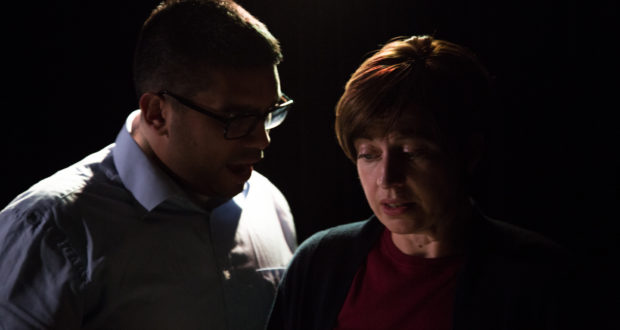 Pros: Several compelling topics are flawlessly chained together, with sublime acting, solid direction and detailed technical elements. Cons: Ordinarily a seminar room, the Assembly George Square Studio Five has a rigid layout that prevents a real connection between audience and performers. Arun is a young call-centre operator who needs money for uni, Anna is an affectionate sister who's training for a 5k charity run and Karen is the apologetic single mother of a withdrawn young man. The three of them don't know each other, but their lives eventually touch when three agonising losses tear their worlds apart. Arun hadn't realised that&hellip;

The lives of three distinct characters accidentally touch through the means of psychological abuse, radicalisation and self-deprecation.

User Rating: Be the first one !
Arun is a young call-centre operator who needs money for uni, Anna is an affectionate sister who’s training for a 5k charity run and Karen is the apologetic single mother of a withdrawn young man. The three of them don’t know each other, but their lives eventually touch when three agonising losses tear their worlds apart.

Arun hadn’t realised that his friend Glenn was a heavy drinker, Anna thought her sister Jane was okay with her oppressive husband and Karen didn’t make much of her son Daniel’s reluctance to talk about religion and politics. Suddenly though, Glenn, Jane and Daniel disappear, leaving behind a trail of shame, regret and sense of impotence.

The set is entirely white. The furniture, the crockery and even the postcards, the pictures and the newspapers that reveal the fate of a missing relative are painted white. Stark like the lies that coat the lives of Glenn, Jane and Daniel. One by one, these objects are banned to the bin, suddenly meaningless, reflective of a reality that was merely perceived and never actually true.

The humanity of the characters and their vivid despair hits the audience hard, and the sighs become increasingly noticeable towards the end of this hour-long  account. In the part of Arun, Harpal Hayer is a soothing figure, Jenny Delisle offers a dignified depiction of her maternal role and Serin Ibrahim is a determined woman who brings some optimism in a highly dramatic plot. Their brief connections are gently underlined by a hint of brighter lighting, which proves how detailed the technical elements are.

Psychological abuse, radicalisation and self-deprecation are often the cause of the physical, emotional and ideological estrangement portrayed by Siân Rowland in Gazing at a Distant Star. Her poignant stories remind us that ‘we all want to be found eventually’ and that is always worth reaching out, before it’s too late. Be prepared to leave the auditorium with a lump in your throat.