You can use WP menu builder to build menus
Home » Features and Interviews » Voices on Accessibility: Shakespeare’s Globe and Turtle Key Arts 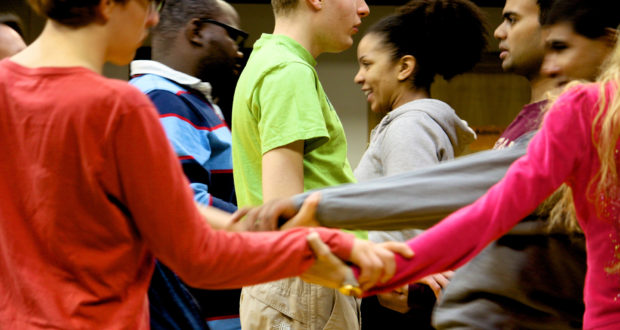 Accessibility has always been one of the hottest issues within the arts industry, and in recent years, the importance of embracing and celebrating diversity has become a shared responsibility for creatives and theatre-makers alike. Here, two influential advocates of accessibility – Turtle Key Arts Artistic Director Charlotte Cunningham and Shakespeare’s Globe Senior Marketing & Access Officer David Bellwood – share their experiences of making theatre more accessible to audiences and give some insights into their companies’ future accessibility goals.

Defining the concept of accessibility in relation to the performing arts is not easy. The term can be interpreted in many ways and presents several different aspects, from accommodating wheelchair users to engaging new communities. ‘When Turtle Key Arts first opened as a performance space in 1989, it was primarily about physical access to buildings for wheelchair users, hearing loops or signed and audio described performances – all things not readily available at the time,’ recalls Turtle Key Arts co-founder and artistic director Charlotte Cunningham. ‘We also felt that access was not just about the audience and we wanted to create platforms and opportunities for disabled artists on stage and backstage.’

‘Access is also difficult for people who have geographical barriers, those who live in places where arts are not provided, communities that are hard to reach because of differences in culture or language and those who feel that the arts are not aimed at them,’ continues Cunningham. ‘There are also groups that people shy away from because they’re harder to engage. In our case, this includes children and young people with autism, people with dementia, young people with HIV and interfaith and intercultural projects.’

David Bellwood, Senior Marketing & Access Officer at Shakespeare’s Globe, defines accessibility in a similarly broad way, saying it’s ‘about ensuring that anyone who wants to engage with the performing arts has the opportunity to do so.’

‘It’s about making sure that there’s no object or idea that’s stopping people from just walking into a theatre or coming in a wheelchair or however they need to come,’ Bellwood continues. ‘It is about celebrating how different humans are and understanding that different bodies treat space differently, also people whose brains work differently respond differently to what’s happening.’

Despite an increased awareness towards inclusion and the remarkable achievements of creatives and arts organisations, some aspects of accessibility are still generally overlooked. ‘The landscape has changed a lot in the last 27 years, and the opening ceremony of the Paralympics was a testament to all the artists that had struggled to make their voices heard,’ Cunningham points out. ‘Access to the entire industry, though, is still hard for those who don’t have the financial resources to support themselves in the early years of an arts career.’

A particularly under-utilised aspect of accessibility, Bellwood argues, is the ability to give audiences an experience more in-tune with their own specific needs. ‘A lot of access work tries to make someone’s experience just average, often trying to fill in the blanks. Audio-description, for example, is filling the blanks for people who can’t see, but that forces them to have the experience of a sighted person, instead of celebrating the fact that a visually impaired person has a unique experience,’ Bellwood says. ‘We could enforce how unique it is to be visually impaired by having more visually impaired people working in the artistic side of theatre production, writers, actors or directors.’

Bellwood also notes that accessibility can’t be exclusively considered with regards to disability, noting the challenges that come with ageing alone. ‘There is a strange confidence in London that older people can come to theatre because they have more money but, often, buildings are difficult to navigate, staircases are narrow and, during the incoming of the show, the foyer is very busy, which can be quite threatening and disorientating. Once people stop coming to the theatre, they’re not going to come back and a lot more work should be done toward maintaining older audiences,’ Bellwood says.

Both organisations promote several initiatives and implement a series of measures to engage with the most vulnerable and disadvantaged parts of society. Turtle Key Arts’ mission to unlock creative potential through access to art begins with targeting specific communities and persuading them to get involved. ‘We then ensure high quality artistic experiences, often in partnership with companies like English Touring Opera, Royal College of Music, Wigmore Hall, National Portrait Gallery, Royal Court Theatre and Lyric Hammersmith,’ Cunningham says.

‘This could be composing music and lyrics for a new song cycle, writing a play or producing a film. Our projects often end in a sharing or public performance, which gives value to the work and a sense of achievement and legacy to the participants. We also help other companies to design outreach work alongside their shows and open up their offering with relaxed performances, touch tours, interactive workshops or community involvement.’

As a registered educational charity, Shakespeare’s Globe has had collaborations with disability charities like RNIB, Action On Hearing Loss or Sense, but the theatre’s main focus is its in-house projects. ‘We have an internal access group, with members of staff who have previously worked in other theatres and bring in a wealth of information. We also have an external advice group, made up of disabled audience members, deaf and disabled actors, parents and museum specialists, all of whom advise us in the direction to take,’ Bellwoods says.

‘We work with Touretteshero, aka Jess Thom, a theatre-maker and performer who has Tourette’s, a poorly understood condition which can be quite challenging. We’re also working with Will Renel – a PhD candidate at the Helen Hamlyn Centre for Design – on a project about sonic inclusion and the way the soundscape of the Globe changes how we feel and how this could be a barrier or something that makes us more inclusive,’ Bellwood continues. ‘We’re always looking for advice, because we couldn’t improve unless we got the opinions of people that we are actually working for.’

In pursuing its accessibility goals, the Globe has to face the structural limitation of a building with a strong historic value and unique layout – but, according to Bellwood, these supposed challenges provide some benefits. ‘When we designed our new theatre, the Sam Wanamaker Playhouse, we had to make sure that wheelchair users and other disabled people could get onto stage as everyone else. For that, we have staircases that transform into lifts and other little pieces which use technology but look like they belong to the authentic world of the Elizabethan stage,’ Bellwood explains. ‘On the flipside, because the auditoriums are daylit or candlelit, all of the audience and actors can see the rest of the audience, meaning that they can’t ignore the fact that someone might be different from them.’

‘Also, both stages imply very different scopes and ways of making scenery,’ Bellwood points out. ‘The audience need to work together, with their imagination, to create a play, whereas in other theatres they can be quite passive and let the play happen. Therefore, the more diverse the audience is, the more of that imaginative energy is going into producing the final play and that makes our stages a lot more accessible than other spaces.’

However, not all challenges are structural, and in its nearly three decades of activity, Turtle Key Arts had to overcome its own hurdles. ‘In the early years of our existence we had to prove ourselves to various communities and show that we were doing this as a part of a long-term commitment and belief. Being accepted by many disabled artists and companies – and the fact that we still retain many of those relationships – is something to be proud of,’ Cunningham says.

Although equality in the arts is still far from being established, production companies like Turtle Key Arts and organisations like the Shakespeare’s Globe have brought the discussion on accessibility into the public eye, and the organisations continue to strive for improvement with ambitious and groundbreaking plans. ‘Turtle Key Arts is a small organisation that cherishes relationships with others, and we would like to see many of our projects rolled out to even more areas of the country with local partners,’ admits Cunningham. ‘In the current climate, I’d like to look more closely at our interfaith and intercultural work. The project we designed a few years ago is based around a story exchange model and I’d like to see it active in more schools and communities, to help start new conversations and bring people together through the arts.’

Bellwood, too, is looking forward to the Globe taking further steps toward broader accessibility, describing his excitement for a ‘huge project’ the theatre is undertaking to better accommodate deaf audiences.

‘Amongst many forms of deafness, there is one spelled with a capital “D” [that] refers to people deaf from birth, with sign language as their first language,’ Bellwood explains. ‘Their understanding of English is different from oral people and they don’t necessarily encounter Shakespeare in the same way. The Globe is working with an amazing group of deaf actors to film 37 short synopses in sign language, one for each of Shakespeare’s plays. Once published, the videos will become an open access resource for everyone who understands British sign language to engage with his works on the same level as oral people. Something fascinating about sign language is that if you’re talking about people, you have to inhabit that role so, by nature, British sign language gets into the world described, which gives us an opportunity to recreate it very creatively.’

Thanks to the influential work of these and other arts industry organisations, the concept of accessibility has significantly evolved from its original reference to disability. Nowadays, the term bears a more general human understanding of mental and physical illness, age, poverty, cultural differences and more. Celebrating diversity and recognising the importance of granting equal access to the arts are the first and most important steps towards changing attitudes and producing a personal and inclusive creative experience.