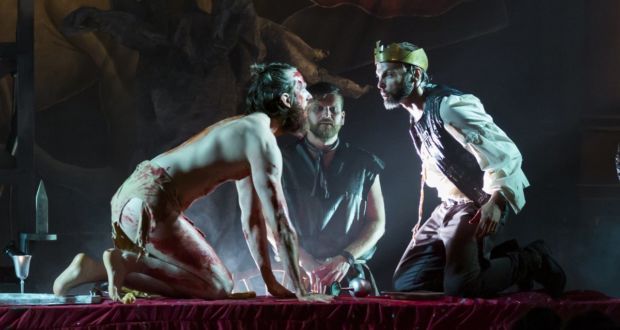 Pros: Excellent characterisation, projection and dominance in an unusual space, never losing momentum nor the opportunity to splash some fake blood.

Pros: Excellent characterisation, projection and dominance in an unusual space, never losing momentum nor the opportunity to splash some fake blood. Cons: The audience moves to several different locations, and the novelty factor eventually wears off. Besides this, logistical issues make the interval experience frustrating. If you were studying Macbeth at school or college and you needed to really dig into the text, you couldn’t go far wrong with Iris Theatre’s production of Shakespeare’s bleak Scottish slaughter-fest. Firstly, there’s no risk of the most common Shakespeare-watching side-effect: the numb bum. The stage is split between several parts of the&hellip;

The Scottish Play with a surreal sci-fi costume twist. Just seven actors tackle the many gory roles, dashing between indoor and outdoor stage areas. The setup is possibly too unorthodox for Shakespeare traditionalists, but it’s invigorating for the rest of us.

If you were studying Macbeth at school or college and you needed to really dig into the text, you couldn’t go far wrong with Iris Theatre’s production of Shakespeare’s bleak Scottish slaughter-fest. Firstly, there’s no risk of the most common Shakespeare-watching side-effect: the numb bum. The stage is split between several parts of the grounds at St Paul’s Church, Covent Garden (known as ‘the actors’ church’); the audience moves onto each section, guided by the actors, who remain in character. It’s a bit like speed dating, only with spilt drops of fake blood to dodge as the bodies pile up.

Obviously, the cast is too busy breaking a sweat to feel the chill. The story begins when three witches tell an ambitious soldier and landowner (guess his name) that he’ll become king. With some encouragement from his scheming wife, Macbeth bumps off the current monarch and anyone else who stands in the way of this prophecy coming true – an opportunity for fight director Roger Bartlett to showcase his skills.

As this production lasts three hours (including interval), the constant audience upheaval does get annoying, but it breaks up some of the slower sections (although the Malcolm and Macduff scene could have been trimmed). Despite the movement, I’d suggest bringing thick coats or blankets to keep warm, as things get chilly outdoors.

Whilst you’re unmistakably still in London – the booming backing tracks of Covent Garden street performers drift over, somehow failing to distract the cast – Scotland is conjured up with minimal set design, all tangled tree branches and craggy rocks. Some backdrops seem sloppy, especially an awkward section with some rather lacklustre apparitions. The scenery is rightly overshadowed by Anna Sances’ costume design, which utilises a mixture of period, contemporary and even sci-fi elements. Yes, sci-fi: there’s futuristic padded armour on several soldiers, and the three witches who predict Macbeth’s rise and fall are depicted as giant insects with nightmarish features, announced by doom-laden music. One bug even walks on stilts. As an opening spectacle, the three witches are disturbing; I wondered if I’d inadvertently walked into a painfully off-the-wall production which would crank up the weirdness at the expense of storytelling. Fortunately, I was wrong.

Shakespeare’s dialogue is delivered by a capable cast, particularly Linford Johnson as Ross and Nick Howard-Brown as a truly haunting Banquo, spewing ghostly blood and loving every minute of haunting David Hywel Baynes’ Macbeth. Mogali Masuku makes a glowing professional debut as Lady Macbeth, moving from tears to anger in a split second; she’s definitely one to watch in the future.

However much I enjoyed the production itself, I can’t ignore the interval experience. In a long play, you need a decent break more than ever, but St. Paul’s Church fails to provide. With no on-site toilets, and the two nearest public toilet sites inexplicably closed, you must trek across Covent Garden to Starbucks (other tiny café toilets are available). Between toilet hunting and queuing, this wastes 75% of the interval. Back at the churchyard, the audience can freely smoke in the cramped makeshift foyer area, which feels disrespectful and antisocial. It sounds petty, but having a smooth-running interval helps to win audience favour.

By experimenting with multiple stages and costume influences, and asking actors to take on several roles with lightning-quick changes and speedy delivery, this isn’t a slow-burning Macbeth. It’s a full-on version of the bloodthirsty tragedy that asks the viewer to be more involved than ever and makes them rethink the text.