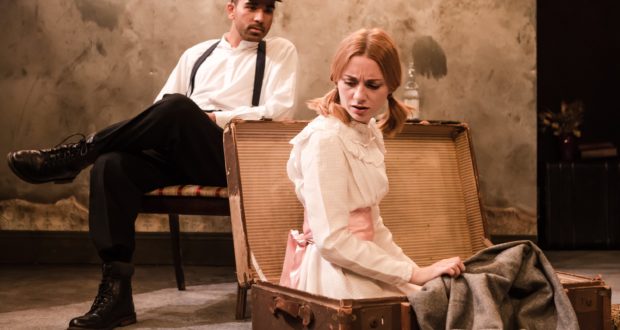 Pros: UK premiere of a well written play Cons: Theatrically underwhelming The Jermyn Street Theatre is a small, characterful venue. Among the imposing buildings off Piccadilly you could easily miss the tiny entrance. It’s a lovely feeling to descend the narrow flight of steps to this basement theatre, leave the noise of the West End behind and enter a secret world of theatre. In the last few years the Jermyn Street Theatre has been doing really interesting things, staging rarely performed plays as well as new writing. This was the UK premier of The Last Ones by Maxim Gorky,&hellip;

The cast is good, and there are some tender and comic moments, but overall this production fails to make much impact.

User Rating: 3.47 ( 13 votes)
The Jermyn Street Theatre is a small, characterful venue. Among the imposing buildings off Piccadilly you could easily miss the tiny entrance. It’s a lovely feeling to descend the narrow flight of steps to this basement theatre, leave the noise of the West End behind and enter a secret world of theatre. In the last few years the Jermyn Street Theatre has been doing really interesting things, staging rarely performed plays as well as new writing. This was the UK premier of The Last Ones by Maxim Gorky, a Russian writer who I’ll confess I knew little about before seeing the play.  Born Alexei Peshkov in 1868, as a young man he renamed himself Gorky (it means ‘bitter’) in reference to the political turmoil and corruption infecting Russia at the time. Although he gained popularity during his lifetime, his life was harsh – marked by poverty, ill health and periods in prison for his activism. He was a friend of Chekhov and I recognised in this play the bleak and epic quality familiar to me from Chekhov’s realist family dramas.

Set after the bloody 1905 revolution, the family of a corrupt ex-police chief are living in poverty and fear, relying on handouts from their uncle. The play explores the relationships between parents and children, and questions of truth and justice, as the children come to see their father for who he really is. An audio clip of Donald Trump which played as the house lights went down was obviously an attempt to flag up the contemporary relevance of the play. Daragh O’Malley as Ivan had something of the Donald about him – heavy set, petulant, and sleazy. His wife Sonya (a composed performance from Louise Gold) described him at one point as ‘besotted with himself’. Other than that, the play didn’t resonate particularly strongly for me. There were some memorable lines – ‘It’s not always good to tell the truth’- that felt significant, but at heart this was a family drama, and therein was the problem for me. Unfortunately the characters just did not relate convincingly to one another. Omar Baroud as the young policeman Yakorev was a distinctive presence with a nice comedic touch, but he often missed opportunities to relate to his love interest Vera (Kirsten Obank). A bit of business where she climbs into a suitcase should have been much funnier, and again, when she screamed in his face he remained confusingly impassive.

It seemed odd to me that this cast of accomplished actors didn’t bring the play to life. Entrances and exits were frequently weak, with people wandering on and off with little sense of purpose. Actors were either slow to pick up each other’s lines, or they talked over one another. In the first two acts particularly movement was stiff and awkward. Having said that, everybody loosened up after the interval. Nadia, played by Emily Woodward, was energised and watchable, as was Obank, who changed convincingly from innocent girl to jaded wife. Costume and set were predictable and added little, only the lighting was notable – occasionally punctuating the text with flickering bare bulbs hung low from the ceiling.

This is Anthony Biggs’ last production as Artistic Director of Jermyn Street Theatre and he has made an interesting and original choice with this play. It runs until 1 July and I hope that issues with pacing, blocking and relationships, which were in evidence on the second night, will be ironed out. Unfortunately my experience of the production didn’t live up to the excitement I felt descending the steps to this lovely theatre.