Home » Opinions » Bringing ‘Kiss Me’ to the West End Stage 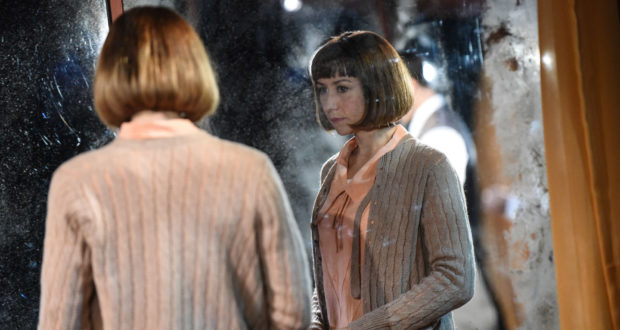 Claire Lams in 'Kiss Me' (Photo by Robert Day)

Bringing ‘Kiss Me’ to the West End Stage

After debuting at the Hampstead Theatre’s downstairs space in autumn 2016, Kiss Me, a play by One Man Two Guvnors playwright Richard Bean, is now on the West End at Trafalgar Studios. The two-person play, set in London post-World War I, tells the emotional love story of a man and a war widow who wants a child. In this guest blog, leading actress Claire Lams shares her journey of bringing Kiss Me to the Trafalgar stage – and why, as a woman, sometimes it pays to complain.

I spent an evening at the theatre two years ago, complaining to my friend, the playwright, Richard Bean. We’d worked together on Harvest and One Man Two Guvnors, and he had obviously copped an earful for many years about how few good parts there are for female actors when, like me, you’re not from the right background, and you didn’t go to a prestigious drama school. It can feel like you don’t have a voice in the industry you have been in for decades and that you love, spending your life avoiding friends and relations who want to know if you’ve got any work coming up.

Richard had clearly had about all he could take of this, because he barked ‘Okay. I’ll write you a play.’

A few weeks later, he sent me an article that he’d found with the headline ‘Secret Sperm Donor Service in Post-First World War London’. It was single source journalism, and so not backed up by any evidence, but it immediately caught the imagination.  It felt exciting. Though honestly, I was sceptical that it would get written – Richard is in high demand, he is super busy. Even if it was written, I couldn’t really believe that when it came down to it, I’d get the part, even if Richard wanted me for it. That’s just not how things happen.  Then a script started to emerge, with Richard calling me every now and then with the odd question about character. When he sent me the first draft, I felt such a quiet connection with the character Stephanie, it was exhilarating. Then came the news that Richard had sent the play to Hampstead and they liked it. It was happening.

The wonderful Anna Ledwich came on board to direct. It’s always nerve wracking meeting the director – what if you both see the characters in different ways? Especially when there are only two characters in the whole play, there’s nothing to hide behind if things aren’t exactly right. I needn’t have worried. We had the same questions, the same outlook on life, work and Kiss Me. Then we had to ‘get a man in’, as my mother would say!

Anna and I auditioned to find our Dennis. We saw around 15 men and swiftly agreed on the first person we saw, Ben Lloyd-Hughes. He had a brilliant ambiguity to him and had the ability to be funny and serious at the same time.

Rehearsals were intense but joyous – there’s something about working with a very small cast. Our breaks were full of outrageous anecdotes and even more outrageous gossip. A really good team.

Ben and I had a wonderful time at Hampstead with great feedback from the audiences. In our final week, we jumped at the chance to transfer to the Trafalgar 2. It’s a lovely intimate space, which is exactly what this play needs– it should feel like you are in the room with us.  It would also take the play to a wider audience and be reviewed for the first time, which is terrifying and exciting in equal measure.

We had a week to re-rehearse, which was tight. We hadn’t performed the play for six months and the stage at the Trafalgar is a different configuration to Hampstead, so the blocking had to change. It’s bizarre revisiting a play which is the same but different. Like you’re in a strange dream. But this is a dream job.

Apparently, it’s unbecoming for a woman to complain – I’d say balls to that, get stuck in, make someone take notice.

Kiss Me is currently playing at Trafalgar Studios through 8 July.