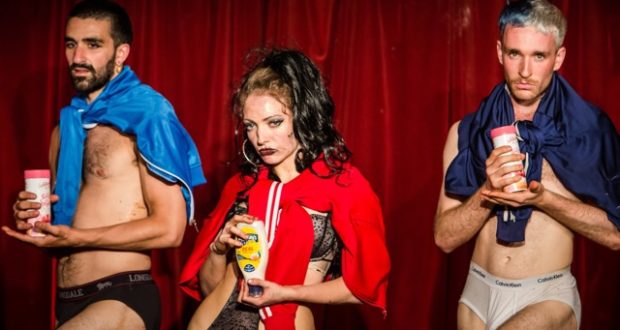 Pros: This show is slick, funny and unlike anything you’ve ever seen before.

&nbsp; Pros: This show is slick, funny and unlike anything you’ve ever seen before. Cons: It’s also completely over the top, frequently predictable and kind of gross. Last night, as my plus one and I made our way out of the auditorium at the end of the show, we were both silent for a minute. And then we looked at each other. “Well, that was, um, something else, wasn’t it?” Triple Threat is something of a mix between cabaret, comedy and performance art. It comes to the downstairs space at Soho Theatre after a successful run at the Edinburgh&hellip;

Irreverent, bold and outrageous, this show is just something else.

Last night, as my plus one and I made our way out of the auditorium at the end of the show, we were both silent for a minute. And then we looked at each other. “Well, that was, um, something else, wasn’t it?”

Triple Threat is something of a mix between cabaret, comedy and performance art. It comes to the downstairs space at Soho Theatre after a successful run at the Edinburgh Fringe last year. Lucy McCormick, backed up by a Girl Squad in the shape of two hunky male dancers, has set herself the challenge of presenting an abbreviated version of the New Testament, in which she plays all the main roles. The resulting show is something that needs to be seen to be believed.

Let’s get this clear from the start: this show basks in its own offensiveness and bad taste. For God’s sake, do not take your parents. Or your children. Or anyone even remotely religious. Part piss-take on the bible, part piss-take on celebrity/ reality TV/ social media culture, a more-than-half-naked McCormick & Co. grind their way through the most famous scenes from Jesus’ life. Wisely they have decided to exclude the crucifixion.

Occasionally, it’s hilarious; the three wise men enter with a slick dance routine to Christina Aguilera’s Dirrty, before McCormick showers the audience with Frankfurters (rather than frankincense) and myrrh-ingues. Equally funny are the bits when her faithful sidekicks try to share the limelight, only to be cut down savagely. We also got to sing along to various power ballads, a treat that brought the already exuberant audience to even greater heights.

It’s all outrageously over the top, and in its best moments that serves the show well; on other occasions, it’s just too much. McCormick has clearly decided to take on the ridiculous excesses of contemporary culture by going even further, piling even more on top. Everything she does is more vacuous, more disgusting and/or more naked. That’s a totally valid form of social critique, but it’s not the most intelligent or engaging one. As soon as you’ve figured out the theme, much of the show becomes fairly predictable as well. Judas’ betrayal of Jesus naturally leads to some extremely heavy petting on the auditorium floor. And when McCormick announces that she’ll be tackling the scene of Doubting Thomas, starring herself as Jesus, it’s immediately obvious that this is not going to be limited to any stigmata holes. (Spoiler alert: they do cover literally every other hole. Literally.)

Nevertheless, Triple Threat is good fun, and it’s executed well. The inclusion of a range of pop songs is great fun, especially when they contextualise the music within the subject matter in hilariously unexpected ways. When Mary Magdalene finds Jesus’ empty tomb and breaks out into Justin Bieber’s Sorry, including the line “I’m missing more than just your body”, the audience roars with laughter. McCormick’s singing is good, except when it’s purposefully bad, and the trio’s dance routines look absolutely amazing. Let’s be honest, this really is something else, however you want to interpret that. But… you have been warned.