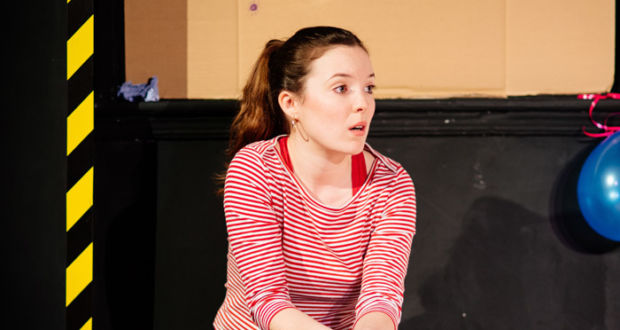 Pros: Genius writing coupled with impressive acting.   Cons: The suddenness of the play may confuse people. Possibly. Sorry to be such a killjoy, but being a young adult today is pretty tough - just not for the reasons you may think. It’s hard because the lack of meaning and connection in this world makes finding yourself incredibly difficult. It is an odd sensation of mania and numbness which I am sure many people can relate to - and a feeling that can hardly be expressed without sounding pathetic. Yet Jack Thorne does it impeccably in his new tale,&hellip;

Theatre at its rawest. A moving insight into not only the mind but the world.

User Rating: 4.7 ( 1 votes)
Sorry to be such a killjoy, but being a young adult today is pretty tough – just not for the reasons you may think. It’s hard because the lack of meaning and connection in this world makes finding yourself incredibly difficult. It is an odd sensation of mania and numbness which I am sure many people can relate to – and a feeling that can hardly be expressed without sounding pathetic. Yet Jack Thorne does it impeccably in his new tale, Bunny.

A one-act, one-woman performance, Bunny plunges you into the mind of Katie (Catherine Lamb). Katie is a refreshing protagonist because the audience get the full scope of her character through her stream of consciousness. She’s likeable, but not in a way which presents her as wholly good. The audience get to know her darkest secrets, her intrusive thoughts and her greatest fears and because of that I was drawn to her. Katie is one of the most realistic characters I’ve seen on stage in a while, reflecting how brilliant the writing was.

Let me be clear: Thorne is a genius. He deserves every single award he has been given. Through pure skill he managed to turn what was simply an account of a summer’s afternoon (albeit no ordinary afternoon as it involved a fight, car chase and siege) into an elaborate and detailed map of a character’s mind and a society which no longer seems to care. Every line was full of poetical depth.

At the same time credit has to be given to Lamb for an astounding performance. At no point during the production did I feel I was watching an actor on stage. She brought Katie to life as well as every other persona in Katie’s story. I don’t know how or where she got the energy, but Lamb managed to nail every line, movement, sound and lighting cue. I felt as if I was being retold a story by a friend, not watching a production. In addition the use of dynamic theatre, direct address and special effects really emphasised the power of theatre. This production will plunge you into another world… okay, Luton, but it seems like another world.

The only thing I think people may have a problem with in Bunny is its choppy nature. For those who don’t understand this feeling of delirious mania juxtaposed with stinging numbness, the fast-paced abruptness of the show may be jarring. However, for me it made sense. Especially the ending (which I won’t spoil) – a show like Bunny which looks at the relationship between people and isolation did not deserve a cliched ending. Bunny stayed true to itself ‘til the very end, and bowed out Katie in a realistic and fitting way.

So is it worth the £10 to £12 a ticket? Absolutely. Bunny is an edgy new show which will have you laughing as much as it will have you gripping your seat. Thorne’s writing coupled with Lamb’s performance is genius – and if that isn’t enough of a reason to go see the show The White Bear Pub below sells some crackin’ great food. For the price this is a night out you won’t forget any time soon.

Previous: a profoundly affectionate, passionate devotion to someone (-noun), Royal Court Theatre — Review
Next: Made In India, Soho Theatre – Review