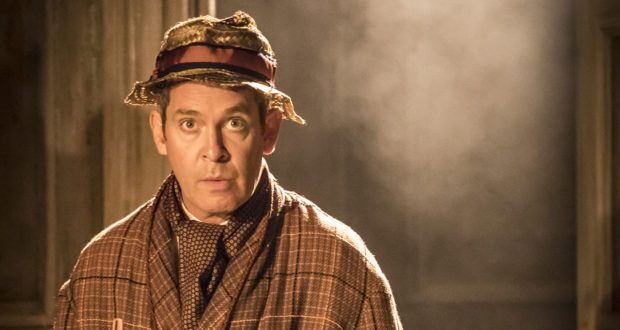 After a record-breaking run in October 2016 at the Menier Chocolate Factory – where the show was sold out before its first preview – Tom Stoppard’s Travesties is now playing a limited run at the Apollo Theatre. Most critics predicted the West End transfer of Patrick Marber’s revival production, which retains the Menier production’s cast and features Tom Hollander’s acclaimed performance as British ambassador Henry Carr.

Marber’s direction breathes new life into Stoppard’s 1974 comedy, which has traditionally wowed audiences with its elaborate, and often cryptic, script. Set in 1917 Zurich, Travesties intertwines mundane topics like love, art and literature with historical elements of World War I and the Russian Revolution — whilst simultaneously fitting in episodes involving the life and deeds of Lenin, James Joyce and Tristan Tzara, the father of Dada. As if this wasn’t enough, the whole plot unfolds around a pastiche of Oscar Wilde’s The Importance of Being Earnest and features scenes written entirely in limericks, along with the occasional Russian monologue.

To get her head round this promising – if mildly disorienting – premise, Marianna Meloni reached out to screen and stage actor Tim Wallers, who plays the role of Bennett, a consular butler with Marxist views. Here, Wallers tells us more about his character and what to expect from Stoppard’s hidden gem.

How would you describe Travesties and director Patrick Marber’s take on it in this production?
Travesties covers a whole range of themes – from love, to war and art – with dizzying originality and it is a laugh-out-loud funny show. Patrick Marber has given us a very current, sexy and entertaining production.

Last year’s first run of Travesties at the Menier Chocolate Factory sold out before its first preview, and most critics immediately foresaw a transfer to the West End. What do you think is the secret ingredient that makes this play such a hit?
I’d say accessibility, clarity and a sense of fun suggesting that it’s ok not to understand stuff.

Tom Stoppard filled his play with literary, artistic and political references to the period of WWI, using a pastiche of The Importance of Being Earnest as its backbone. Do you think it is necessary to have some preparation on these subjects to entirely appreciate the show?
A cursory knowledge of The Importance of Being Earnest is definitely a plus. Other than that, just go with the flow.

Tell us more about your character. What is Bennett’s role within the play? Has this been a challenging role to take on?
Bennett is a great part to play. He is the butler, but not just any butler . . . he turns quite different from what he seems! The challenge of the role is that it is very prop-bound, with many different entrances and exits, and a lot of them are done while explaining various facts about the Russian Revolution!

What is your favourite aspect of this production? Is there any character or scene where Stoppard really surpassed himself, or that you think this production handles particularly well?
Tom Hollander’s monologue at the beginning of the play is one of the most skillful pieces of stage craft I have ever witnessed.

With a career spanning film, television and theatre, what do you see as theatre’s advantage over these other forms? Do you think a live audience can add something to the performance, and do you miss its vibe when you stay away from the stage for too long?
It is said often, but a live audience that is palpably enjoying what they are watching is an unbeatable joy for all concerned.

Travesties first debuted in 1974. Why do you think this show continues to resonate in 2017?
Big themes such as love and revolution never date, especially when handled by a master.

Travesties is playing at the Apollo Theatre until 29 April 2017. Tickets can be booked here.