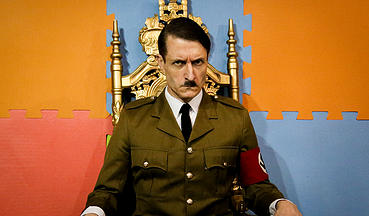 Pros: A strong cast and an original story that’s poignant and thought-provoking.

Cons: The pace is a tad off at times and I could hear the band in the pub next door.
Big Brother Blitzkrieg, King’s Head Theatre – Review

Pros: A strong cast and an original story that’s poignant and thought-provoking. Cons: The pace is a tad off at times and I could hear the band in the pub next door. I love travelling past the wall to North London to see shows at the King’s Head Theatre in Angel. From F*cking Men to Five Guys, this theatre, much like the wonderful Above The Stag in Vauxhall, has really made a name for itself as the go-to venue for cutting edge LGBT theatre in the capital. This venue never disappoints (unless you're served by the grumpy bar manager),&hellip;

A funny yet terrifying play with a strong ensemble and very dark undertones.

I love travelling past the wall to North London to see shows at the King’s Head Theatre in Angel. From F*cking Men to Five Guys, this theatre, much like the wonderful Above The Stag in Vauxhall, has really made a name for itself as the go-to venue for cutting edge LGBT theatre in the capital. This venue never disappoints (unless you’re served by the grumpy bar manager), so I must admit I was slightly hesitant when I read the synopsis for Big Brother Blitzkrieg. Stick with me and imagine, if you will, the following: after Hitler’s suicide attempt failed, he was sort of cryogenically frozen. Now, however, he’s defrosted and wakes up in the Big Brother house. Exactly! On paper this made me want to climb every mountain and run away as fast as I could, but on stage it’s disturbingly enjoyable.

Big Brother Blitzkrieg had its premiere at the Edinburgh Festival back in 2014, so it’s had a few years to be fine-tuned and evolve with the times. With the possibility of Trump winning the United States presidency, a play about a bigoted fascistic dictator and the power of both celebrity and reality TV couldn’t be more poignant.

Written by Hew Rous Eyre and Max Elton, who are also the co-founders of production company Bitter Pill Theatre, Big Brother Blitzkrieg is an audacious satire that has you laughing out loud, yet quivering with fear at the chilling implications. The cast is an ensemble of six actors who all portray the guaranteed mix of car crash characters you’d expect to see in a low budget Channel 5 Big Brother show. The camp, over-the-top gay man, the asexual, the mother figure, the bitch and the stoner. Chuck in a new house mate with a dodgy tash and you have a 60 minute riot.

From Bruno Ganz in the superb Downfall to Robert Caryle in The Rise Of Evil, I’ve always admired any actor that takes on the role of the Führer and in this play the role is superbly portrayed by Stephen Chance. It must be hard to not fall into an over-exaggerated caricature of this famous, grumpy sociopath, but Chance is wonderful and makes the role his own. His portrayal of Hitler’s initial confusion, naive innocence and determination to ‘EVICT! EVICT!’ is so good that I, shockingly, was rooting for him! And therein lies the terror. Jenny Jones, as stuck up PR bitch Lucy, is equally brilliant and terrifying as I work in PR and have worked for women like her before. Hitler’s nemesis, mother figure and goody-two-shoes Rachel, is portrayed so brilliantly by Tracey Ann Wood that you want to slap her, she’s so nice and homely. Neil Summerville plays the extremely camp Felix and he, along with his numerous hot pants, is hilarious if not a tad too clichéd. Kit Loyd is strong as stoner and cool kid M-Cat and Hannah Douglas is great as proud asexual, bisexual or polyamorous Charlie. All six actors work well together as a strong ensemble who weave around the obscure, but engaging, plot with gusto. A special mention has to go out to George Smith as the monotone, potty mouthed voice of Big Brother. Hilarious!

The direction, by show creators Rous Eyre and Elton, is creative and there are some great moments of hilarity and drama. I did find the pace was broken up too much by unnecessary, random filler music and blackouts. Nevertheless, the final minute of this show is sheer goose-bump-inducing genius!

Big Brother Blitzkrieg is an original and bold production that needs to be seen to be believed. Who needs Kinga with a wine bottle in the garden now?

Previous: Win tickets to No Villain at Trafalgar Studios
Next: The Complete Works of William Shakespeare (Abridged), The Bread and Roses Theatre – Review