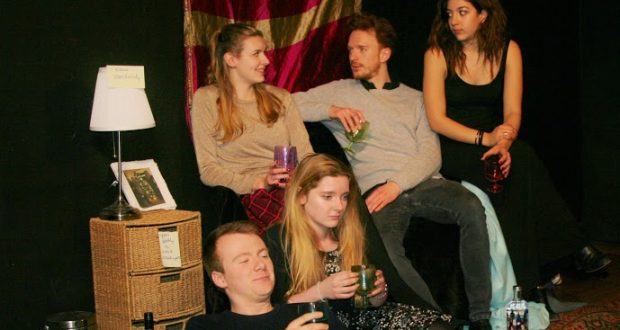 Pros: Energetic and upbeat, several funny moments, and a gleefully horrible baddie! Cons: Space layout worked against dramatic setting; dialogue tended towards the histrionic by the end. This showcase production of Stench happened in a function room at London's gorgeous Conway Hall. Instinct Theatre had transformed it, pretend-game style, into a rather large living room: a sofa and a coffee-table covered in detritus faced two rows of seats. There was no-one there to tell me if I was in the right place or not, but I sat down anyway, wishing I (or any other young Londoner I know) had a&hellip;

Sparky cast had to work hard to compensate for less than ideal setting, and unpolished script.

This showcase production of Stench happened in a function room at London’s gorgeous Conway Hall. Instinct Theatre had transformed it, pretend-game style, into a rather large living room: a sofa and a coffee-table covered in detritus faced two rows of seats. There was no-one there to tell me if I was in the right place or not, but I sat down anyway, wishing I (or any other young Londoner I know) had a living room this big.

Instinct Theatre was established in 2015 by actor-directors Lily Driver and Felicity Huxley-Miners. Since then, they’ve been busy: a schools tour and production of Sartre’s No Exit plus a run of Stench, which is also the pair’s first foray into scriptwriting. A classic sitcom-style beginning: three friends meet in their living room after work and drive each other up the wall. Beck – a borderline OCD wannabe actress, played with coquettish charm by Driver – gets ousted from the loo by space-cadet fashionista Tilly (a luminous Marina Tapakoudes) who denies responsibility for the stench that escapes just as posh, acid-tongued Kate – played subtly by Huxley-Miners – bursts in. The scene unfolded beautifully – lots of laughs, and a clear sense of friends quite enjoying tolerating each other.

If the show had remained a three-hander, perhaps I would have found it more convincing. But things started going out of focus for me when Kate’s brother Nick (a gleefully sleazy Andrew Armitage) appeared, and refused to go away. After that, it’s all about him, not them. Beck fancies him, Tilly can’t bear being ignored by him (she is, constantly), and Kate just wants him to leave. Then Nick’s friend Zachary arrived, and sent sparks flying between siblings. He was too clearly a plot device to be really interesting, luring Nick out of the room (temporarily), and leading Kate into the ‘kitchen’ (a door stage right, which oddly served as the bathroom door) for a short-lived romantic moment.

As the play darkened towards its end, important events often happened without any real sense of warning. Tilly – upon whom the play’s dark ending rests – was especially short-changed. Nothing had suggested to me that she was anything more than a mildly needy sidekick character; the one who ‘pooed’ in the opening scene (someone had to). Then out of nowhere, the spectre of a past romance appeared as if it had been hinted at before (it hadn’t), and her neediness suddenly became a serious personality disorder. It felt like lots had been edited out that ought to have stayed in. Nick and Kate’s big reconciliation scene was similarly underpowered because of lack of build-up. “Why here? Why now?”, I wanted to ask.

Some of the best moments in Stench are unspoken. Tentative chemistry between Kate and Zachary was ridiculous and touching. I was enchanted by the body language in Beck and Kate’s first bickering conversation, but less so by their (largely static) climactic row. Andrew Armitage’s Nick made my skin crawl – swaggering, insufferable, maybe slightly overdone. I couldn’t imagine anyone, however troubled, allowing him to stay a whole evening. But he was fun to watch.

There was lots to like in Stench, but more that felt unfinished. Several times, the writing thwarted the actors from really ‘getting their teeth into’ some of the more dramatic moments. The cavernous setting confused other moments, which would have been clear in the original studio staging. With a designer and co-writer (hence, a slightly less busy acting-directing team) it would have been an different matter. Perhaps the company already know this: their next show will be penned by a competition-winning scriptwriter. I look forward to seeing the fruits of that new development.