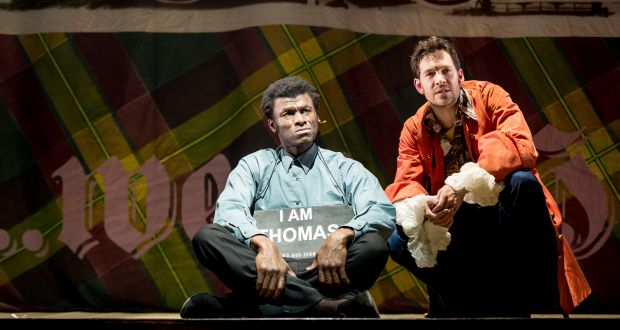 Cons: Some songs aren’t exactly memorable, and the bare bones story is stretched a little thin at times.
I Am Thomas, Wilton’s Music Hall – Review

Pros: Invigorating wit, rollicking songs, a lively eclectic design and John Pfumojena’s dazzling voice. Cons: Some songs aren’t exactly memorable, and the bare bones story is stretched a little thin at times. ‘Thomas Aikenhead – who the f*ck is he?’ sing the cast of I Am Thomas, a darkly comic new musical co-produced by Told By An Idiot, the National Theatre of Scotland, and Edinburgh’s Royal Lyceum Theatre. Well, as the audience soon learns, Thomas Aikenhead was a student in Edinburgh in the late 17th century. In 1697, he was sentenced to death for blasphemy and hanged at the&hellip;

I Am Thomas is a smart, funny, stylish and thoroughly Scottish paean to a forgotten subversive.

User Rating: 4.6 ( 1 votes)
‘Thomas Aikenhead – who the f*ck is he?’ sing the cast of I Am Thomas, a darkly comic new musical co-produced by Told By An Idiot, the National Theatre of Scotland, and Edinburgh’s Royal Lyceum Theatre. Well, as the audience soon learns, Thomas Aikenhead was a student in Edinburgh in the late 17th century. In 1697, he was sentenced to death for blasphemy and hanged at the tender age of 20, the last person executed for blasphemy in Britain.

I Am Thomas is a collaborative work, inspired by Aikenhead’s story and an original short story by James Robertson. The poet Simon Armitage has penned lyrics for Iain Johnstone’s raucous, resonant score, and the finished product, directed by Paul Hunter, is a wonderful triumph of wit, imagination and unabashedly rampant eclecticism. It’s relentlessly intelligent too, a wry tribute to subversives everywhere.

This may be the story of a 300 year old travesty of justice, but it is translated to a stylish hybrid of seventies modishness and parodic period get-ups. Flares and flamboyant 17th century wigs rub alongside each other with surprising alacrity. And this mashed-up setting is itself bookended by a modern-day meeting of a council planning committee, who alight upon Aikenhead as a contender for an empty statue plinth (after contemplating Dolly the Sheep and Archie Gemmill).

The cast all multi-role, taking turns to play Aikenhead, lending the blasphemous scholar a certain enigma. When played by Johnstone (who performs as well as composing), he is a sensitive dreamer, wondering at the night sky through his telescope. When played by Hannah McPake, he is a fiery political-activist-cum-singer-songwriter, a Scottish Billy Bragg. When played by Charlie Folorunsho, he is a proud and resolute non-conformist, spitting in the eye of the uber-religious state. He is presented throughout, whoever plays him, as a martyr in the cause of the cynicism and scepticism that is our religion today. He is even ironically likened to Jesus in a brief pastiche of the nativity.

Elsewhere, Myra McFadyen rolls back the years as Mungo, the dopey buffoon who grasses Aikenhead to the authorities. Dominic Marsh is enjoyable as Sir James Stewart, the Lord Advocate determined to send Aikenhead down. Resplendent in an aristocratic wig, jaunty red jacket and sumptuous flares, he is a prim and proper Establishment figure with his own tortured past, delightfully explored at the end of the second half.

I Am Thomas is peppered with bizarre little skits and songs. Occasionally, Amanda Hadingue and McFadyen analyse the action place in the style of Match of the Day, McFadyen supplying a roguish impersonation of Alan Hansen. The odd soundbite of football commentary or film dialogue will sneak its way in between scenes. And on three occasions, John Pfumojena, who skulks around the smoky set with gothic menace for the most part, bursts into sublime peals of Zimbabwean singing that are utterly breathtaking.

If you are going to catch I Am Thomas, you ought to see it at Wilton’s Musical Hall while it is still there. The shabby, scruffy 19th century space is quite perfect for this slightly shabby, scruffy musical. And you really ought to catch it. As Pfumojena’s ‘Je Suis Thomas’ t-shirt emphasises at the play’s denouement, we all owe a debt to Thomas Aikenhead. Whoever the f*ck that is.

Previous: Blue on Blue, Tristan Bates Theatre – Review
Next: The Ups and Downs of Self-Producing