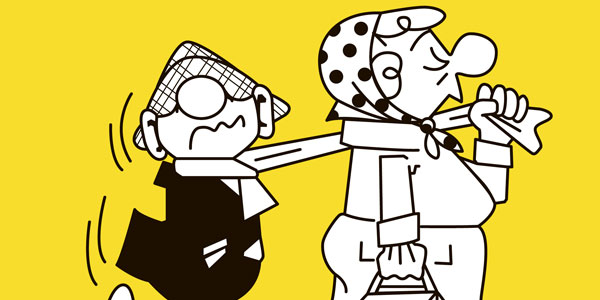 Pros: The leads are well cast, and there are great musical numbers and a witty script.

Pros: The leads are well cast, and there are great musical numbers and a witty script. Cons: This show deserves a larger performance space, which would allow for less crowding and better sound quality. The Finborough Theatre is known for rediscovering neglected works and celebrating British musical theatre. Its current production of Andy Capp - The Musical does both. The show is based on a comic strip by Reg Smythe. Smythe was asked by The Daily Mirror to create a comic strip that would appeal to northerners, and Andy Capp was the result. Little did Smyth know that the&hellip;

A funny and charming production that portrays working class life and its struggles.

The Finborough Theatre is known for rediscovering neglected works and celebrating British musical theatre. Its current production of Andy Capp – The Musical does both. The show is based on a comic strip by Reg Smythe. Smythe was asked by The Daily Mirror to create a comic strip that would appeal to northerners, and Andy Capp was the result. Little did Smyth know that the lazy, sexist and vulgar character he created would become so globally popular. The musical adaptation first opened in London in 1982, but has not been professionally performed in the UK since that production closed. Now, thirty years on, Andy Capp has returned to London and even those who, like me, have no previous knowledge of the comic strip before watching are guaranteed to enjoy it.

The musical explores the dynamics of different relationships and how a community sticks together through hardships. The lead character is Andy Capp (Roger Alborough), who has been unemployed for over thirty years and spends his time racing pigeons and drinking heavily. He relies on his wife Florence (Lynn Robertson Hay) for everything, but rarely gives her the gratitude she deserves. They are stuck in a marital rut and Andy’s sexist behaviour is sometimes quite shocking. As Andy’s favourite hang out spot, many scenes are set in the local pub. Here we meet lots of the local faces. There is a feeling of celebration due to the upcoming wedding of young couple Raquel (Tori Hargreaves) and Elvis (Tom Pepper), but Raquel’s overdramatic mother (Paddy Navin) is determined to make sure their marriage won’t end up like Flo and Andy’s.

Musical director Tim Shaw accompanies the show and creates quite a big sound when joined by the actor-musicians. This is problematic at times, as the actors do not have microphones and lyrics are sometimes lost. The cast are vocally strong however, and there are many great musical numbers. Good Old Legs and O Gawd, Men …. Beasts! are particularly highlights, as well as the more sombre When You’ve Lived in Love With Someone. The narration by Geordie (David Muscat) is also very enjoyable.

The number of actors from the original production hasn’t been cut down, which makes for group numbers that are high in energy, but also quite crowded. The performance space is very small and at times it feels like one wrong move could mean the entire cast would be taken out like dominos. The cast members handle this very well however, and choreography utilises the space well. The humour of the piece is well executed and the cast create a feeling of warmth and jubilation throughout. All in all a worthwhile show, whether you’re a hardcore Andy Capp follower or a complete novice.

After first completing a foundation course in Musical Theatre, Lily then went on to study an English Literature degree. Since graduating last summer, she has spent a great deal of time watching and writing about theatre. Watching is usually teamed with a glass of red and writing with a strong coffee. Aiming to try out a new coffee shop every time she writes, she now knows the London coffee shop scene like the back of her hand, but will always forget the name of where she’s been within ten minutes of leaving. She hopes to work in theatre press and marketing. Loves: rucksacks, red lipstick and rap music.