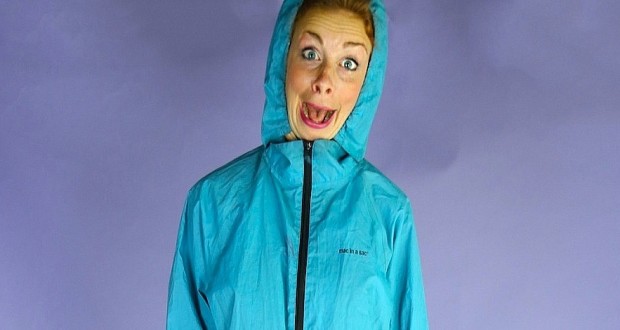 Pros: A mesmerising hour of absolute anarchic lunacy starring Helen’s vagina. Cons: The initial feelings of embarrassment at being picked for audience participation. The expression ‘stand up’ doesn’t quite cover the performance offered by Helen Duff. Rolling, staggering, dancing, singing, lying down demonstrating impossible sexual positions (‘that one made me feel like an ironing board’) is more like it. Helen bounds onto the stage, dressed as a spermatozoa in blue tights and a rain mac. She then proceeds to make fun of her audience with the results of a survey she claims to have carried out about orgasm, asking&hellip;

One of the silliest, funniest evenings you can spend contemplating the niceties of orgasm.

The expression ‘stand up’ doesn’t quite cover the performance offered by Helen Duff. Rolling, staggering, dancing, singing, lying down demonstrating impossible sexual positions (‘that one made me feel like an ironing board’) is more like it. Helen bounds onto the stage, dressed as a spermatozoa in blue tights and a rain mac. She then proceeds to make fun of her audience with the results of a survey she claims to have carried out about orgasm, asking opinions in a naïve but matter-of-fact way about things we’d all rather not have to discuss in a sold-out comedy club.

Quite why she choses to appear as a sperm never really becomes clear, but she proceeds to regale us with stories of her own about failures in the sexual area, at one stage wondering what an orgasm like an Australian train might be like (hopefully not delayed and slow like English ones, she tells us). The evening continues, partly along planned lines and partly in response to the brave souls who were willing to participate in her discussions of their sexual fears and pleasures. Having explained her purpose for the evening – to provide her vagina with the perfect orgasm – she then metamorphoses into her own vagina, stripping off the blue sperm outfit to reveal a pink outfit including a woolly hat she’d bought that day to represent her clitoris (‘the girl in the shop thought it looked a bit infected’).

After a ten minute riff on a female ejaculation workshop she become an obnoxious orgasm guru, the show leads to its culmination. Handing out props to the audience, and explaining the reasons she has included them, she encourages us all to help her vagina experience all the ways her survey says other people experience climax. What follows is a downright daft audience participation in a sort of symbolic (and, I should add, fully clothed) attempt to recreate a really good orgasm. At this stage the event becomes a little like a children’s panto with sections of the audience calling out responses and the poor souls given the props (a packet of ginger nuts, a bunch of bananas, water pistols, a soft toy) wondering what on earth they’re expected to do with them.

Largely improvised, her show no doubt changes as the mood takes her, but what stands out is Helen’s enormous energy and total lack of inhibition. She presents herself as a monumentally naïve creature and somehow, by about ten minutes into the show, when you’ve been trying to avoid eye contact in case she picks on you, all that anxiety is forgotten and you’re yelling ‘die die’ with the rest of the audience. The show might have been about orgasm, but it was pretty much the most innuendo free stand up I’ve seen in a long time. From the one night at the Comedy Room she goes on to a stint in Bristol and then Perth, but can be seen again at the end of February at the Vault Festival. And this show will be worth the wait.

Author and Director: Helen Duff
Booking Information: This show has now completed its run at the Camden Comedy Room, but it will play at the Vault Festival on 24 – 28 February.