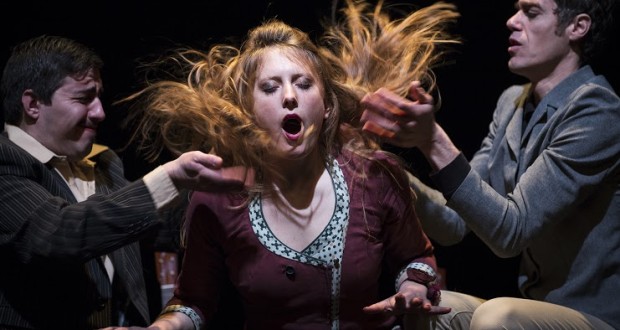 Pros: This is the show to mention if you want to prove that anyone can be a contemporary circus artist.

Pros: This is the show to mention if you want to prove that anyone can be a contemporary circus artist. Cons: Definitely not family friendly, despite the production’s advice. I must admit that I arrived to The Albany Arts Centre in Deptford with great expectations. Their website promised a cafe bar with food and drink, opened in line with their evening programme, and the concept behind the show - labelled as “contemporary circus” - sounded quite intriguing. Unfortunately I wasn’t impressed by the overall experience. First of all, I’ve noticed a certain discrepancy on the name given to the triple&hellip;

A slow paced and muddled show where the artists’ talent often drowns in a lack of consistency.

User Rating: Be the first one !
I must admit that I arrived to The Albany Arts Centre in Deptford with great expectations. Their website promised a cafe bar with food and drink, opened in line with their evening programme, and the concept behind the show – labelled as “contemporary circus” – sounded quite intriguing. Unfortunately I wasn’t impressed by the overall experience. First of all, I’ve noticed a certain discrepancy on the name given to the triple bill, promoted alternatively as Circus Mayhem and Al Cubo by Company BettiCombo – featuring Jon Hicks & Rimski with special guest Miranda la Mutanta. Then, food was no longer served in the café and drinks weren’t necessarily locally sourced as promised; the venue staff looked a bit confused and unsure on how to direct the public.

Oliver Cumming, aka Rimski, is a cycling pianist who developed a device able to satisfy his passion for bikes and music at the same time. He opened the performance pedalling his multi-purpose piano around the café area, whilst playing and singing, accompanied by his visual artist wife Miranda La Mutanta. After a few songs, the audience were invited to follow him inside the auditorium where, in an attempt to rescue his instrument from fire, he left the stage to Jon Hicks and his repertoire of curious performances and artistic oddities – as we read in his bio. Undoubtedly entertaining with his egg-crobatics and false illusionism, his best number was by far the upside-down speed painting.

After the interval, the show resumed with the Company BettiCombo, a French-Italian trio presenting an act of buckets manipulation which was amazing at times for its precision. Unfortunately the talent of Fabrizio Rosselli with his ukulele, Francesco Caspani’s juggling skills, and the beautiful transitions of Ilaria Senter on the Chinese Pole got lost among unnecessary pauses and questionable comic scenes.

My adrenaline reached its peak when the male acts started stripping their clothes before the wondering eyes of two little girls, who had previously sat on the floor by the first row in order to improve their view. Feeling a certain shame, by the time the modesties of both artists were entrusted to a white bucket, I was no longer thinking about the show, nervous for the presence of children. On their promotional leaflet, the production company Crying Out Loud states that the show has been created for audiences of all ages, great for groups, parties and extended families. Their only expressed concern refers to the length of the show, considered unsuitable for people under 7 years at 95 minutes. A classification apparently backed by the box office which offered a family ticket deal.

As an arts space, The Albany has been promoting cultural diffusion for over 100 years, originally under the name of “The Deptford Fund”. Countless studies in recent years have demonstrated how engagement in the arts supports the improvement of the individual and the larger society. Well done to this community centre for fostering development through the arts in one of South East London’s most culturally diverse neighbourhoods.

Previous: Encounter, Above the Stag – Review
Next: Win Tickets to Grounded at Park Theatre