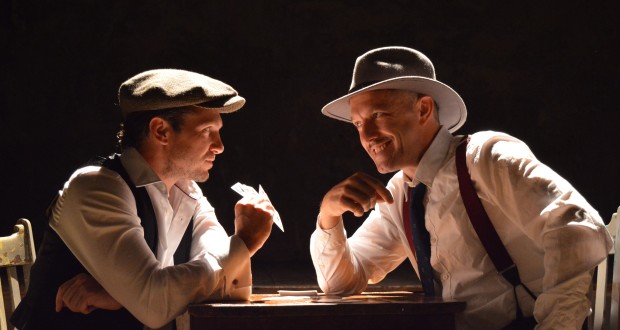 Pros: Wilton’s Music Hall is a wonderful venue for theatre, and the attention to detail throughout the Hall is very effective in creating an atmosphere.

Cons: There is little chemistry between the cast, which makes it hard to emphasise with the characters and believe the unfolding story.
The Sting, Wilton’s Music Hall – review

Pros: Wilton’s Music Hall is a wonderful venue for theatre, and the attention to detail throughout the Hall is very effective in creating an atmosphere. Cons: There is little chemistry between the cast, which makes it hard to emphasise with the characters and believe the unfolding story. I’ve always wanted to go to Wilton’s Music Hall; it holds a wonderfully romantic air of mystery and intrigue, so I was delighted to head there to see The Sting. The Hall has a fascinating history and you can sense this as soon as you enter through the large wooden doors. I’d&hellip;

This show has the potential to be stunning: it’s set in a unique venue and features some brilliant ideas. However, it lacks a spark and it left audience members fidgeting.

User Rating: Be the first one !
I’ve always wanted to go to Wilton’s Music Hall; it holds a wonderfully romantic air of mystery and intrigue, so I was delighted to head there to see The Sting. The Hall has a fascinating history and you can sense this as soon as you enter through the large wooden doors. I’d advise finding somewhere for a pre-show snack before you head over to the venue itself, as there is very little in the vicinity.

With this stunning setting I felt that The Sting was going to be a treat. The level of detail in the venue, from the thirties advertisements on the toilet doors to the jazz band playing in the bar as the show finished, were spot on. Even the programme was something to marvel at: a newspaper listing some con artists to be aware of (the cast) and featuring advertisements for venues from the play. I wish I’d dressed in 1930s attire! Unfortunately there was just something missing once the show began.

I haven’t seen the original film version of The Sting, so I went into this show not really knowing what to expect. Without giving too much away, the story focuses on con men Johnny Hooker and Henry Gondorff, who work together to swindle a dangerous gangster out of his money. The show is narrated by a bar singer who entertains the audience as we take our seats and welcomes us to 1930s Chicago. With her incredibly strong voice, she immediately set expectations high. The staging of the busy city is very clever, with cast members rushing across the stage. This hustle and bustle continues throughout the play but on occasion it was too obviously staged: you could almost see the cast saying ‘sausages, sausages, sausages’ to give the illusion of chatter. Unfortunately this is a recurring issue, which made the whole play rather difficult to swallow. Even if you’re being transported to a world that can’t exist, theatre should make you believe you’re there and I just couldn’t quite believe in this production.

The actors have some very strong moments, a few one-liners from the female characters were brilliant and the suspense created is particularly effective when Hooker realises there is a man outside who has arrived to kill him. But overall the cast lacked chemistry and it occasionally felt like they were just reading their lines rather than acting them. Although the plot of the play is intentionally confusing to a certain extent, it was made all the more so by some confusing costume changes. The result is a first act that felt rather long and a fidgety audience.

On talking about the show on the way back to the tube station, the best way we could describe it was that it’s like going on a date with someone who is very nice and with whom you share similar interests, but there is just no spark. Nevertheless, this is a highly atmospheric show with a lot of good ideas. With a bit more work, it could be brilliant.