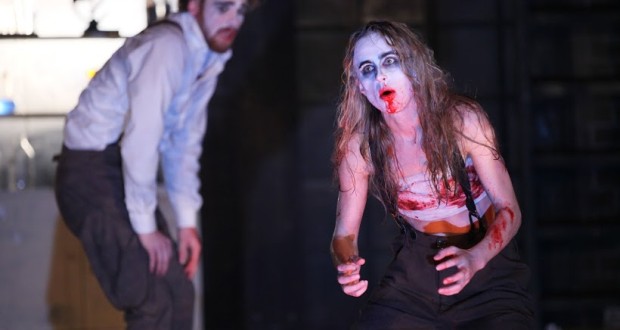 Pros: Inventive staging, strong leads and imaginative direction. Cons: Weak supporting cast and a convoluted plot. King's Cross is unrecognisable nowadays. It's taken years, but the once dodgy area of the capital is now not only a hive of activity but also an exciting hub for creativity. Right in the heart of this North London creativity stands the rather glorious Platform Theatre. Designed as part of the University of the Arts London's award winning campus for Central Saint Martins College of Arts and Design, Platform Theatre is a simply stunning theatrical space. Friendly staff, cutting edge architecture, lovely bar&hellip;

An original and creative adaptation of an iconic classic that sadly just doesn't reach the dramatic heights one hopes for.

King’s Cross is unrecognisable nowadays. It’s taken years, but the once dodgy area of the capital is now not only a hive of activity but also an exciting hub for creativity. Right in the heart of this North London creativity stands the rather glorious Platform Theatre. Designed as part of the University of the Arts London’s award winning campus for Central Saint Martins College of Arts and Design, Platform Theatre is a simply stunning theatrical space. Friendly staff, cutting edge architecture, lovely bar and an electric atmosphere – what more can you ask for?

As I entered the main auditorium I was instantly struck by the rather magnificent stage. Designed by Neil Irish, hundreds of glorious red Chinese lanterns adorn the heights of the set, where smoke pummels out of grids across a brick-strewn stage. Odd, but wonderful. All of these factors, combined with the creepy sound effects of heartbeats and industrial London, all set up the scene for this version of Jekyll and Hyde incredibly well.

I take my hat off to the show’s writer and director Jonathan Holloway, as adapting Robert Louis Stevenson’s iconic horror into a short eighty minute one act play is no mean feat. Holloway’s version sees Jekyll as a woman wanting to be a man which I found, as a concept, thrilling. This simple gender switch and feminist nod is creative genius and allows you to see Jekyll in an entirely new light. The script had some wonderfully rich dialogue for the actors to dive into and I found some of the monologues beautifully written and well acted.

However, it’s the plot that sadly lets this show down a bit. I found the overarching story of the dodgy publisher trying to sell the story we were watching play out in front of us unnecessary. To add to this there were several references to China which, combined with all of the red lanterns and the actors saying they were in London’s East End, resulted in the show feeling disjointed and as schizophrenic as its heroine. Granted the Chinese references are due to the fact that this production is in collaboration with The Chung Ying Theatre Company and I can see how this could’ve worked in the Hong Kong production.

Holloway’s direction across the production with the whole cast was inventive, creative and well thought out. The leads of this show were stellar. Olivia Winteringham, as the emotionally scarred Jekyll who has fled abuse and war, was powerful and disturbing. Her Hyde was equally compelling, although I was disappointed that we hardly saw him. Michael Edwards, who plays Jekyll’s rather doe eyed love interest Henry, gave a great and believable performance. He commanded the stage whenever he was on it and was a strong presence throughout. Graeme Rose Enfield I also found strong and engaging. Much like the plot however, I sadly found the supporting cast a bit all over the place. The two performers from Hong Kong were acting by numbers and, although great with facial expression and dramatic movement, I found them weak. The musical interludes, which are completely unexpected yet beautifully mastered by Jon Nicholls, were wonderful and allowed the cast to work well as a strong ensemble.

The originality of the gender themes and jaw dropping set and stage make this version of Jekyll and Hyde well worth a watch for hard core Stevenson fans.