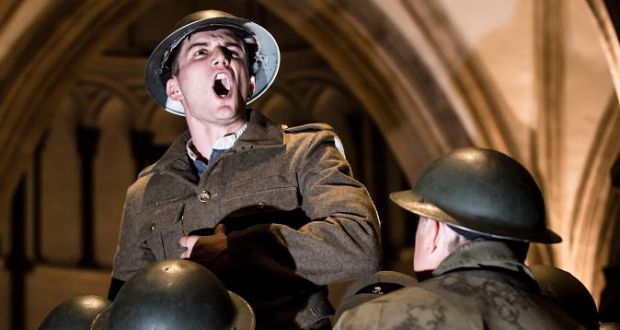 Pro: Strong performances and a clever scenario make this an accessible and charming version of the play.

Pro: Strong performances and a clever scenario make this an accessible and charming version of the play. Cons: Shakespearean purists might balk at the contrived scenario that frames the play. What a setting. Twelfth-century Temple Church is one of the oldest and most beautiful in London, built by the Crusade-loving Knights Templar. It was designed to recall the holiest place in the Crusaders’ world - the circular Church of the Holy Sepulchre in Jerusalem - and its floor is littered with the centuries-old graves of knights. Now, it’s almost as famous for providing the denouement of conspiracy-crazy blockbuster The Da&hellip;

A wonderfully imaginative and evocative staging of one of Shakespeare’s great histories, in a sublime location which quite literally sings.

What a setting. Twelfth-century Temple Church is one of the oldest and most beautiful in London, built by the Crusade-loving Knights Templar. It was designed to recall the holiest place in the Crusaders’ world – the circular Church of the Holy Sepulchre in Jerusalem – and its floor is littered with the centuries-old graves of knights. Now, it’s almost as famous for providing the denouement of conspiracy-crazy blockbuster The Da Vinci Code.

This is the venue of Antic Disposition’s new production of Henry V. But can any play live up to this space? Even Shakespeare’s? Well, yes. Rather than play to the grandeur and period of the location this smart and, frankly, sweet production pulls the play into the First World War.

It’s an incredibly timely piece, with the recent centenary of WW1 and the 600th anniversary of the Battle of Agincourt: a battle depicted in the action of the play, and on the ground where the bloody battles of the Great War took place. This production holds up a canny mirror to contemporary war and peace; the English and French now stand as Allies, but the common man still offers his life to his country. The play’s themes of the glory of war, the horror of war, and of friendship born out of war are all fully realised, and resonate even so much deeper within the walls of this church built by crusaders. Things change; but things stay the same.

Teasing out the themes of peace, the play is relocated to a field hospital in northern France near Agincourt where both English and French wounded soldiers recuperate, using that most Shakespearean of devices: a play within a play. To pass the time the soldiers are performing Henry V. While it takes a read of the program to grasp the concept, and a leap of faith and a dose of goodwill to swallow it, this production offers rewards to the open-minded.

The performances are excellent. In particular, Freddie Stewart as a youthful-looking Henry draws out both the warmth, cheek and nobility of the king, whilst maintaining the undertones of the injured soldier and amateur player too. The play’s famous monologues and great dramatic moments are carried off greatly and gently in his hands; he seems to carry off the big stuff, the really hard-core poetry, with an easy charm.

Andrew Hodges as Fuellen/Bishop of Ely balances a comedic character with an honest soldier, while Mark Middleton’s Pistol fires a bullseye.

As the light outside fades we’re drawn into the atmospheric world of this play, where suffering is overcome by solidarity. It’s here that the addition of AE Housman’s elegiac poems about the death of young men, beautifully set to music by Christopher Peake, seems inspired. Gorgeously performed by this Franco-British company, the verses feel almost like an organic part of the play. Tonally and thematically they are perfect, no doubt in part because Housman quoted Shakespeare’s songs as a major influence to his work. The powerful ambience was encouraged by Temple Church’s numinous space and wonderful acoustics, perfect for singing.

The soldiers’ improvised props – tin-can crowns and cardboard bishop’s mitres – delicately help us grasp the play’s scenario. The staging has been kept sensibly pared down by Director and Designer John Risebero, with a few boxes and bandages suggesting place. Costumes by Laura Rushton lend a lovely authenticity, even up close as the audience are during this production.

While not quite unmissable, this is an excellent production that is a thoroughly enjoyable addition to London’s Shakespearean offering.