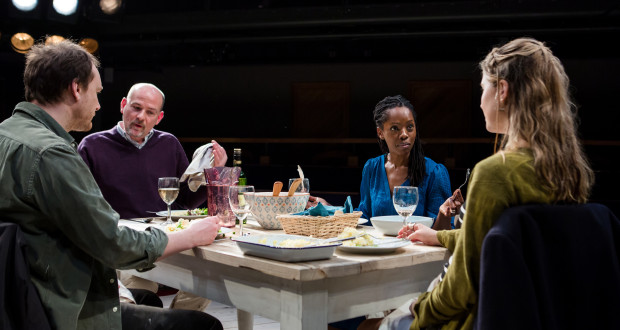 Pros: If you want to see an exceptionally talented cast act their socks, shoes, trousers, shirts and pants off then get your ticket for this show now.

Cons: The depressing subject matter left me low, and filled with despair at humanity’s sins I felt the play could have done with a little more light.
Little Light, Orange Tree Theatre – Review

Pros: If you want to see an exceptionally talented cast act their socks, shoes, trousers, shirts and pants off then get your ticket for this show now. Cons: The depressing subject matter left me low, and filled with despair at humanity’s sins I felt the play could have done with a little more light. Walking out of the Orange Tree theatre after Little Light, I felt like I’d been caught in an emotional windmill during a storm. Over ninety minutes of uninterrupted tension, family bickering, spousal spats, sibling rivalry, bitterness and grief left me in a state of shock.&hellip;

Certainly a must-see for this season at the gorgeous Orange Tree Theatre, this heart-rending tale of loss is full of love, drama and disaster.

Walking out of the Orange Tree theatre after Little Light, I felt like I’d been caught in an emotional windmill during a storm. Over ninety minutes of uninterrupted tension, family bickering, spousal spats, sibling rivalry, bitterness and grief left me in a state of shock. It felt similar to that feeling when you’ve had a near miss in a car, or almost walked in front of a bus that shoots past you; like you came really close to touching something terrifying – like ‘wow, that was intense.’ A rush and yes incredibly good, but intense for sure.

Little Light tells a story in real time of a family reunion (of sorts) that takes place over dinner in a big countryside house, not far from the sea. This meeting is a ritual that sisters Alison (Lorna Brown) and Clarissa (Yolanda Kettle), and Alison’s husband Teddy (Paul Rattray) play out as part of their grief – a grief that stems from a terrible loss experienced years ago.

I’m loath to release spoilers regarding the plot, because the slow reveal of the facts through suggestive and descriptive dialogue was so beautifully composed by writer Alice Birch. In short I’ll just sum it up as the least successful dinner party ever held. No common courtesies, cheese tasting or coffee – just the nastiness of dissonant people forced to converse by ceremony. Clarissa’s uninvited boyfriend Simon only further complicates these already strained relationships.

A member of the Royal Court Young Writers alumni, Birch has both the attention to form of a well-schooled student, and the intuition and sensitivity to language of a naturally great writer. I loved the decision to structure the scenes around the occasion of the dinner party, as it lent itself so well to the in the round staging at The Orange Tree. Having four exits made it feel like a real house and we the audience were in that same house, an invisible second tier of guests around the expensive wooden dinner table (but thankfully not the subject of any of the rancour.)

The Orange Tree is one of my favourite venues in London, with comfortable seating and good views afforded to all in the intimate auditorium. What it lacks in terms of access and space I would say it makes up for in individuality. Situated on the high street of gorgeous Richmond, the unique stairway at the entrance is just one part of many that make this theatre special.

The venue is particularly given the play’s mocking of the gushing West London courtesies of Simon, played by Paul Hickey. Hickey’s character, like all the other characters, was well developed across the course of the play, and tension slowly mounted to a superb climax. The whole cast were fantastic performers; I was moved to tears during the closing, heart-breaking outburst of Teddy to his wife Alison.

My only real qualm with the play was that it left me so low. Where was the light? The actual lighting design (by Christopher Nairne) was good in the sense that the scenes were incredibly naturalistic, but I felt it could have taken more risks considering how central it was as a theme of hope. However the delicate direction of the final scene led us to grasp at the idea that maybe, just maybe these characters would find solace.

Little Light is a fantastic piece of writing, with an exceptional cast at one of London’s best theatres. The strength of performances alone are well worth the price of a visit to Richmond, and a ticket to this play.

Previous: What even is immersive theatre?
Next: She Loves Me, Landor Theatre – Review