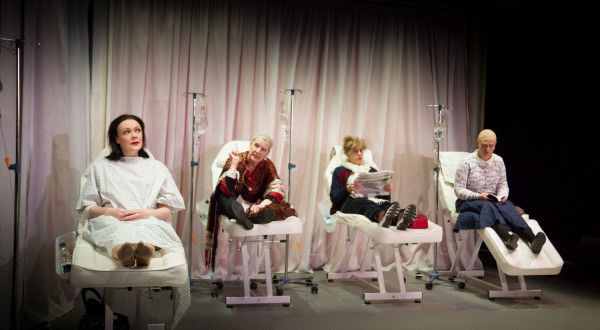 Pros: A bright cast deliver a solid performance working with difficult subject matter. Cons: For all the play’s artistic integrity, it cannot disguise the relentlessly depressing storyline. Having lost both parents to cancer, you might wonder what drew me to Happy Ending, a play about four women undergoing chemotherapy but I still need to understand how my parents coped with such a brutal, unforgiving illness. The play is the final piece written by Anat Gov, who herself fell victim to cancer in 2012. So who better to write about the thoughts, hopes and fears instilled by the condition? Once&hellip;

A valiant effort, but not quite the riposte to cancer one hoped to see.

Having lost both parents to cancer, you might wonder what drew me to Happy Ending, a play about four women undergoing chemotherapy but I still need to understand how my parents coped with such a brutal, unforgiving illness. The play is the final piece written by Anat Gov, who herself fell victim to cancer in 2012. So who better to write about the thoughts, hopes and fears instilled by the condition? Once again, Arcola Theatre plays host to a bold, very different play that tackles the most distressing of subjects.

It begins with three women reclining on beds, each with an intravenous drip; we have Sarah, 29 year-old mother of six, training to be a barrister; Silvia, a feisty 75 year-old born in Auschwitz and Miki, a free-spirited optimist with hippy pretensions. They are soon joined by Carrie, a stage actress of some repute, who has just started her first cycle of treatment. She insists that nobody must know of her condition, not even her two daughters; to the outside world she is merely researching a new stage role. Nurse Fiona diligently runs down a list of side effects resulting from the treatment; reality begins to bite and Carrie’s brave face crumbles. Dr Lynch and junior Dr Arnott discuss Carrie’s case in clinical, almost forensic detail. The prognosis is Stage 4 pancreatic cancer; her co-patients recoil knowing this to be the end game for cancer sufferers.

So begins a series of exchanges between Carrie, hospital staff and her co-patients.  Carrie wants to stop her treatment immediately and enjoy what’s left of her life. Why go through the pain of debilitating treatment if she can’t be cured and her quality of life disappears?  The play raises broad issues about the sanctity of life, euthanasia and even assisted suicide.  But there does seem to be a lack of real insight; the characters are sketchy with only Miki providing any real depth. Something has been lost in translation because it doesn’t even begin to scratch the psyche of a cancer sufferer.   Whilst it’s billed as a musical, it shouldn’t be considered as such; think of it more as a play with songs, there are two either side of the interval; It’s all in the plumbing, literally too much information; Dr Lynch, a misjudged nightmare sequence; Cell by cell, aims for humour but ends up trivialising the subject; and I’m alive, by far the strongest song with a rousing chorus. The songs are thrown in to provide some light relief, but they don’t really gel and add nothing to the narrative.

The cast are resolute and strive to bring their characters alive; Karen Archer as Miki stands out as does Thea Beyleveld as God-fearing Sarah. Andrea Miller is dependable as Silvia while Gillian Kirkpatrick flounces convincingly as Carrie, even after the prognosis dawns on her. The play tries hard but continually misses its target.  Cancer is a depressing subject, and it’s a big ask to present a play that’s both thought provoking and uplifting. Of course, we always choose life, but perhaps we would also choose to refuse treatment if it prolonged life to no effect; it does no more than state the obvious; so no happy ending on this occasion.

Previous: The Companion, Soho Theatre – Review
Next: Mush and Me, JW3 – Review