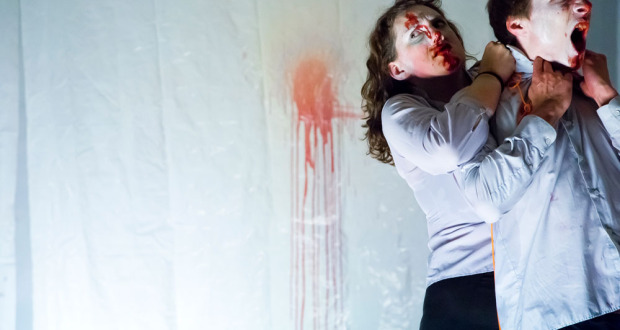 Pros: Excellent clowning, highly inventive sequences, emotionally engaging. Cons: Some untidy and underdeveloped elements, darker elements could be pushed further. The audience enters the little space in the Battersea Arts Centre to an immediately unsettling scene: a little girl with her back to us holding a skipping rope; two figures watching from behind a plastic sheet; silence. As the two figures slowly emerge, grinning inanely and blowing into bottles of brightly coloured milk, the feeling that we are witnessing a psychological horror story intensifies, only to be broken in an instant as the players take on their character roles.&hellip;

A wonderfully absurd and macabre experience that is thoroughly entertaining.

The audience enters the little space in the Battersea Arts Centre to an immediately unsettling scene: a little girl with her back to us holding a skipping rope; two figures watching from behind a plastic sheet; silence. As the two figures slowly emerge, grinning inanely and blowing into bottles of brightly coloured milk, the feeling that we are witnessing a psychological horror story intensifies, only to be broken in an instant as the players take on their character roles. We meet three people, all of whom have committed suicide, who have formed some sort of otherworldly support group. A shy young man who drove his car into a wall (George Ramsay), a housewife who stuck her head in the oven – but not before removing and wrapping up the lasagne (Jennifer Swingler), and a motivational speaker who jumped out of a 9th floor window (Sacha Paige). With palpable influences from the works of Jean-Paul Sartre and Samuel Beckett, we witness them exploring the reasons for taking their own lives, and coming to terms with their purgatory-like existence. But this is only part of the story.

Clout Theatre have set out to explore the idea of a ‘circular hell’ which is full of repetition, re-treading old ground, never moving forward or indeed passing on. What if hell is having to live out your most painful moments over and over again, forever? Through their adept use of clowning, they present the jet black comedy that emerges from this nightmare scenario, switching suddenly between their characters and their grinning, childlike clown personas. Complemented by Naomi Kuyck Cohen’s stark, clinical design and Steven Martin’s eerie, atmospheric sound effects, the performers play through a variety of macabre clowning scenarios, basking in the playing of the game with anarchic abandon.

The most chilling and affecting moments, however, come when the characters each have their individual journey, reliving not the moment of suicide itself but more giving the audience an insight into their state of mind prior to the event. The motivational speaker has a mental breakdown, with Paige showing great intensity and a deep-seated adult angst that is completely at odds with her ‘sweet little girl’ clown persona. George Ramsay’s shy, polite young man is blindfolded and taunted by two figures in animal masks, again showing a softness and helplessness utterly absent in his maniacal clown. The housewife’s story is genuinely horrific to watch, as she lies on the floor delivering a scatty, light-hearted account of her life whilst being buried alive (reminiscent of Beckett’s Happy Days); Swingler shows a wonderful delicacy in her voice and manages to fully engage the audience with her trivial patter, which is no mean feat even without the distraction of watching her slowly disappear under soil.

There are some elements that work better than others, and some segments could do with tightening up and creating a smoother run (or a clearer snap) between them. I also thought they could go even further when exploring some of the darker moments within the piece – I don’t know how exactly, but I’m sure they could think of something. Perhaps the greatest criticism one could make is that it’s a shame there wasn’t more! There was slapstick, gore, and existential questions galore. Even when I didn’t know what was going on, I didn’t care; I was being thoroughly entertained! With a bit more development, Clout Theatre could have a truly unique and phenomenal show on their hands.