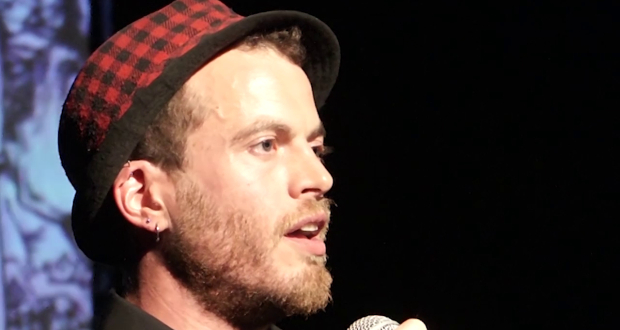 Cons: The performance was very long and the break was very short. It seemed like two full length shows that had been sandwiched together covering very similar issues.
Pete the Temp vs Climate Change, Free Word Centre (Farringdon) – Review

Pros: A light-hearted way to raise awareness about a serious issue delivered by real life climate change activists. Cons: The performance was very long and the break was very short. It seemed like two full length shows that had been sandwiched together covering very similar issues. Pete the Temp vs Climate Change is a stand up show with a difference. Pete is a real-life climate change activist and poet who is using his show to tell his story and raise awareness of climate change across the UK. The performance took place in the Free Word Centre in Farringdon and&hellip;

Despite an overly-long support act, this was a thought-provoking stand-up show about climate change.

Pete the Temp vs Climate Change is a stand up show with a difference. Pete is a real-life climate change activist and poet who is using his show to tell his story and raise awareness of climate change across the UK. The performance took place in the Free Word Centre in Farringdon and was staged very simply, with lecture there style seating and the performers standing at the front of the stage with a microphone and a projector screen behind and full house lights on.

Pete’s show made use of videos, songs, photos, poetry, drawings and spoken word to tell the story of his adventures taking on Governments and big multinational organisations. His performance was pretty thought-provoking and really made me think twice about my own passive ‘armchair activism’. He didn’t preach, but made you think about your own behaviour by talking about his own experiences and his hypocrisy as a smoker and a person who still shops in the big chain supermarkets.

There were some really funny videos that Pete had made as part of his campaign to peacefully protest against the big businesses who are polluting our environment. These included a mock advert for Tesco and a video of him and another activist conning their way into the AGM of an oil company, stripping down to their underwear and rubbing themselves in crude oil in front of the flabbergasted delegates.

The use of multi-media in Pete’s show made it an engaging and interesting performance and I think if his had been the only performance I would have enjoyed it a lot more. But this performance was actually two stand up acts of equal length which had been sandwiched together to create almost three hours of performance.

The support act was a friend of Pete’s who chronicles his own journey from student through to scientist and finally to climate change activist, it was all spoken word with some poetry. His show had some funny parts but was quite long and a bit rambling in places. It was an hour and a quarter long, and as he over ran we ended up only having a 4 minute break in between the shows which was barely long enough to grab a drink and get back into your seat. As a result I have to say that I was getting pretty fidgety and restless by the end. There was really enough material to make two whole shows, or the support act should have been cut down to 30 minutes as they covered very similar content.

The audience was mainly made up of other people with an interest in reversing climate change, so it was a nice atmosphere. Many people seemed to know each other, so it gave you a bit of an insight into what it was like to be part of that world.

If you have a real passion for climate change issues I’d really recommend this show but if not I think you’d probably find it too long. If you get the chance to see Pete by himself though I’d recommend it. He brought the issues to life in an approachable way that even the uninitiated could understand and relate to.

Booking information: This was the final performance in a tour of the UK.
Performed by: Pete the Temp