You can use WP menu builder to build menus
Home » Reviews » Drama » The Trials of Oscar Wilde, Trafalgar Studios – Review 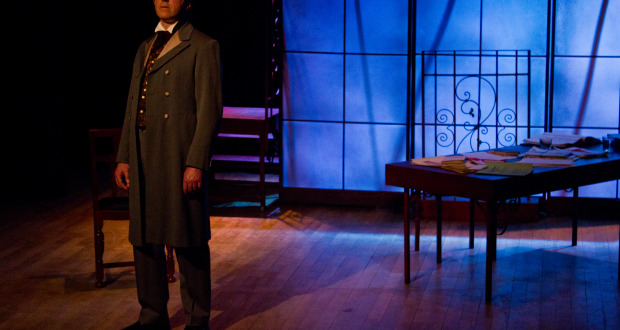 Cons: The construction of the script felt rather forced.
The Trials of Oscar Wilde, Trafalgar Studios – Review

Pros: The three actors performed each character with great distinguish and gave three wonderfully nuanced performances. Cons: The construction of the script felt rather forced. In 1895, Oscar Wilde’s play The Importance of Being Earnest opened to enthusiastic reviews; he was at the top of his literary and artistic career. Little did he know that within 6 months he would be penniless and disgraced. It was in the same year that the Marquess of Queensberry accused Wilde of 'sodomy'. Wilde sued him and lost. We know now the playwright was in-fact gay, but it was as a consequence of&hellip;

An important and educational piece. It somewhat lacked the panache expected for the stage.

In 1895, Oscar Wilde’s play The Importance of Being Earnest opened to enthusiastic reviews; he was at the top of his literary and artistic career. Little did he know that within 6 months he would be penniless and disgraced. It was in the same year that the Marquess of Queensberry accused Wilde of ‘sodomy’. Wilde sued him and lost. We know now the playwright was in-fact gay, but it was as a consequence of this civil case that Wilde was then criminally prosecuted and sent to gaol for two years of hard labour, which ultimately, killed him.

If you’re a semi-regular theatre attendant, I can almost guarantee you will have seen one of Wilde’s plays, the most popular of which is the aforementioned Earnest. Almost as popular as Shakespeare, Wilde’s canon lays the foundation for all witty, sophisticated and popular plays that have come after it. Wilde’s general history is well known by most, as popularised by Stephen Fry’s 1997 film Wilde. This play, however, went into a much greater depth than anything I have seen before about his downfall, using quotes directly taken from court chronicles and other contemporary evidence.

Unfortunately, while the play attempted to embody Wilde’s sharp character in its own construction, it was left a little wanting. It relied heavily on what appears to be evidence taken verbatim from the trial’s manuscript. It was therefore Wilde’s own words he used in 1895 that gave the script life. Fitting perhaps when one considers the play was co-written by Wilde’s grandchild Merlin Holland. The heavy legal language however, does not easily demonstrate to the audience what is actually occuring. I’m not just referring the jargon used today; throw in the fact it was a Victorian court, making it even more difficult. The drama that should have been overflowing with emotion felt dragged up and the story, for me, did not critically examine what actually happened to Wilde in enough detail. I don’t think Holland and his co-author John O’Conner were intending it to be anything other than an education of what did actually happen. But, this was one of the nation’s most loved playwrights, penalised for being gay and in 2014, I feel such a play should truly emphasise the disgracefulness of the criminal trial.

Studio 2 at the Trafalgar Studios is a 100-seater black box and whilst there were flashes of brilliance in the lighting, much of the court scenes were lit too broadly for such a space and detracted from the intimate feel of the venue by lighting up much of the audience. Nevertheless, the idea of a black box space was well-respected by the set which was made up of only a few pieces of integral props. This encouraged the audience to focus on the performances which was executed with great enthusiasm by the three actors. John Gorick, once be-wigged, bore a similarity to Wilde and performsed him with a great spirit for Wilde’s character. Rupert Mason and William Kempsell proved their salt by performing as at least three colourful characters each and each one distinct from the others.

The Trial of Oscar Wilde is an interesting yet flawed piece of art. Nuanced and lovely performances are jilted slightly by the oddly constructed script. Wilde however has not to date been given a pardon by the British Government and until that happens, plays such as The Trial of Oscar Wilde should be supported, appreciated and attended. Not just for Wilde but for all the men and women who didn’t conform to the sexual preference the law thought was appropriate and for all the men and women still suffering in the world today.