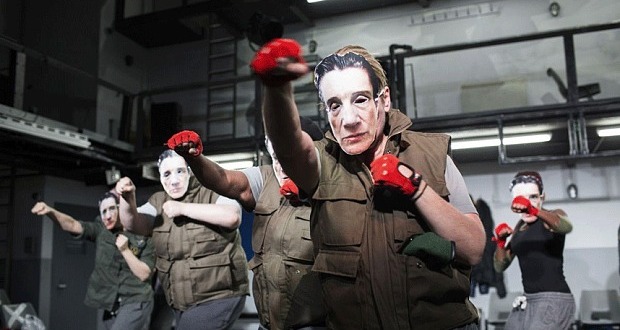 Pros: A clever re-situating puts a new spin on this classic and provides for some stellar performances.

Pros: A clever re-situating puts a new spin on this classic and provides for some stellar performances. Cons: Unnecessary additions to reassert the setting become overbearing. No phones. No sharp objects. No drugs. These are the instructions we are issued with as we are herded up the stairs by the stern prison guards. Much like the Young Vic’s Hamlet of 2011/12, which set the production in a Seventies mental home, a lot of effort has been put into getting the look of the pre-show of the Donmar's Henry IV just right. But just like Hamlet, the effect is somewhat&hellip;

Some incredible turns overcome a few over-egged elements of the adaptation.

No phones. No sharp objects. No drugs. These are the instructions we are issued with as we are herded up the stairs by the stern prison guards. Much like the Young Vic’s Hamlet of 2011/12, which set the production in a Seventies mental home, a lot of effort has been put into getting the look of the pre-show of the Donmar’s Henry IV just right. But just like Hamlet, the effect is somewhat lost as the audience sat around chatting and calling out hellos to friends, as we waited for the (slightly delayed) start. The lateness can be excused though for the house was so packed that stewards were even running out of standing room.

As the play opens, a group of female prisoners file onstage; one eagerly shouting that she was being released in a few weeks time. The prisoner, played by Claire Dunne and who soon becomes our Hal quiets down and takes a seat with the rest. From here, the show begins in earnest as the women put on a production of Henry IV (largely focusing on Part I but incorporating a heavily abridged Part II).

For the most part, the prisoners are absorbed in the piece and stick to the script. They put their own stamp on it, swapping sword fights for boxing, dressing in football shirts and conducting a soliloquy by bellowing into a wall-mounted pay phone; this is part of their charm. What I found unnecessary, however, was the addition of songs and some crowbarred dialogue. I’m not a big fan of inserting any non-original dialogue into Shakespeare given that the text is already so rich and fertile for various interpretations.

However, to make the narrative to work in this piece in terms of tying the Shakespeare to the relationships between the prisoners, it’s an understandable choice. On the other hand,  putting a section with American tourists, as well as a song from Sharon Rooney’s Lady Percy about Percy’s abandonment doesn’t feel crucial, it feels crass. Don’t get me wrong, the song was lovely but it didn’t contribute anything the text hadn’t already communicated so beautifully.

There were some truly remarkable performances that made the evening hugely enjoyable. The absolute standout was perhaps unsurprisingly the title role played by stalwart of the British stage, Harriet Walter. Also impressive were Jade Anouka’s energetic and aptly named Hotspur and Ashley McGuire’s ‘straight up guv’ Falstaff. Falstaff’s soliloquy on honour is frank and touching. When we finish up on the famed ‘I know thee not, old man,’ McGuire and Dunne combine for a gut-wrenching moment.

Another highlight was the Battle of Shrewsbury, played out as shadow boxing with masks to delineate which side each character was on, and Hal and Hotspur marked with H’s on their backs. The visually striking battle culminated in a one-on-one bout between Hal and Hotspur that was both pleasing on the eye (with black outfits and bright red gloves) and just really satisfying as a climax of the tensions built up throughout the piece.

Although there’s parts of this production that are slightly too cool for their own good, for the most part, this is a fantastic female tour de force of an old favourite in a new and interesting setting.