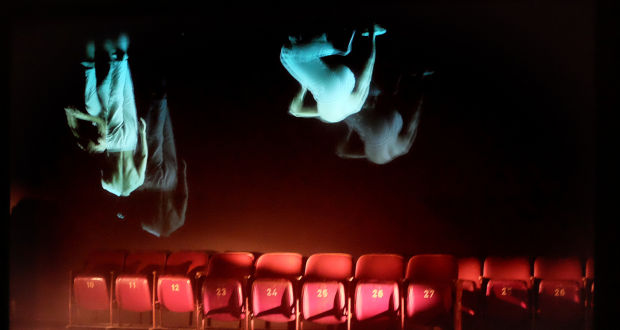 Theatre people are a superstitious bunch. For good reasons too: throughout history, being involved in performance, especially as an actor, has come with its own unique set of dangers and difficulties, from being thrown out of the 15th century church to being thrown into the 21st century job market, life on stage is full of insecurities. Eva de Valk takes a look at some of the hundreds of theatrical superstitions used to combat these insecurities.

The most well-known of course, is that wishing an actor good luck will result in the exact opposite. Instead you should tell them to‘ break a leg’. An ominous sounding wish if ever there was one, the origin of the phrase is the subject of many theories, ranging from the logical to the ludicrous. The most popular ones today are the so-called bowing theory and the traditional theory. According to the first, to break a leg is archaic slang for bowing. When the actor puts one foot behind the other and then proceeds to bend the knee, the straight line of the leg is broken. 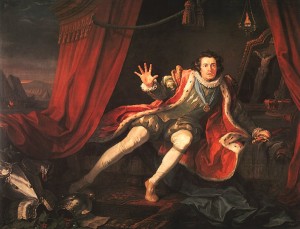 The traditional theory is a bit more dramatic: according to legend, the famous 18th century actor David Garrick broke his leg on stage during a performance of Shakespeare’s Richard III. He was so immersed in his role however, that he didn’t notice until after the show.

An even more colourful story originates with John Wilkes Booth, the man who shot Abraham Lincoln. In his diary the actor-turned-assassin mentioned breaking his leg when he jumped onto the Ford Theatre’s stage after shooting the president. To wish someone to break a leg then is to wish them a performance that’ll go down in history, as this one certainly did. This final theory however is highly unlikely, since actors first started using the phrase in the 1920s, over fifty years after Lincoln’s assassination.

These countermeasures can’t apply when the play is actually being performed rather than rehearsed, which can make doing Macbeth with a particularly superstitious company a nerve-wrecking affair

Another famous one, and probably one of the worst offences in thespian land, is to say the name Macbeth in a theatre. Actors have suffered accidents while performing the play, audience members have been killed and Abraham Lincoln makes his second appearance in theatrical legend by having read the play the night before he was shot. In order to avoid disaster you should use the phrase ‘ the Scottish play’ when talking about the text or ‘ the Scottish king’ when referring to the character.

Quoting from the play is also considered to be unlucky and especially saying the spells used by the witches should be avoided. Needless to say these countermeasures can’t apply when the play is actually being performed rather than rehearsed, which can make doing Macbeth with a particularly superstitious company a nerve-wrecking affair.

Another story states the props master was unable to find a cauldron, and foolishly stole one from a real-life witch

Again, this particular superstition has a number of possible explanations, most of them relating to witchcraft. One of the theories has it that Shakespeare himself went to a coven of witches for the spells. When the witches came to see the performance they found their portrayal on stage less than favourable, and cursed the play in revenge. 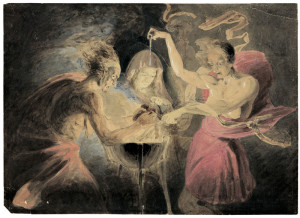 Another story states the props master was unable to find a cauldron, and foolishly stole one from a real-life witch, again leading to the play being cursed. More down-to-earth theorists, however, have suggested that the play’s high accident rate is simply due to its combination of dim lighting and a large number of fight scenes.

Apart from the two big ones there are a large number of less well-known superstitions making life in theatre difficult. Whistling on stage is asking for an accident: a sensible precaution when you consider that in the olden days the technicians working in the rigging above the stage were often out-of-work sailors, who communicated scene changes by whistling to each other. Anyone walking around on stage whistling a random tune could inadvertently signal a changeover and find themselves with a piece of set on their head.

Blue costumes are also unlucky. Blue dye used to be difficult and thus expensive to make, so theatre companies going bankrupt would often invest in blue costumes to fool their audience and potential backers into thinking they were doing very well.

If the theatre is completely dark, its resident ghosts will realise there’s no one there and cause all sorts of trouble during the night

And of course, you should always remember to leave on the ghost light when leaving the theatre; if the theatre is completely dark, its resident ghosts will realise there’s no one there and cause all sorts of trouble during the night. The ghost light is also a help to the living in a more practical sense: downstage areas of a theatre are often used for storing set pieces and props, which can make looking for the light switch in the dark difficult and dangerous. This is where the less dramatic, but maybe more accurate name ‘ the Equity light’, after the actors union, comes from.

There, you’re all sorted now to safely venture into the wonderful world of theatre. Just don’t bring any peacock feathers, mirrors or jewellery, and whatever you do in rehearsal, never speak the last line of the play. Or, in case of doubt, leave it to the professionals. The stage can be a more dangerous place than you think…