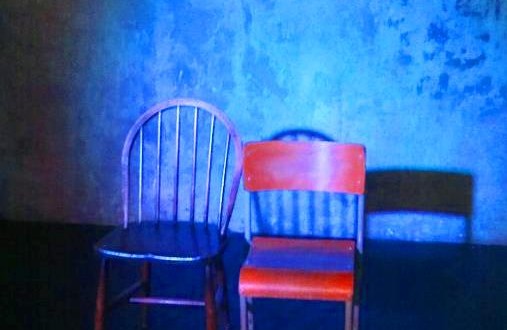 Cons: Not always possible to tell the ‘real’ characters from the imaginary ones.
Nothing to See Here, Etcetera Theatre – Review

Pros: Whimsical piece of new writing exploring a cute concept. Cons: Not always possible to tell the 'real' characters from the imaginary ones. Penelope Faith's Nothing to See Here opens with a series of vignettes around four characters whose stories become more tightly entwined as the show proceeds. There's Maz (Michael Shon), the motivational speaker whose bold words just barely cover his crippling emotional insecurity, his sister Rose (Kim Burnett), who has been left holding the bag caring for their aging mother while her brother seeks fulfilment elsewhere, Jon (Jared Rogers), Maz's only client, and Josie (Bryony Thomas), the&hellip;

Interesting and fun to watch but a little disjointed.

Penelope Faith’s Nothing to See Here opens with a series of vignettes around four characters whose stories become more tightly entwined as the show proceeds. There’s Maz (Michael Shon), the motivational speaker whose bold words just barely cover his crippling emotional insecurity, his sister Rose (Kim Burnett), who has been left holding the bag caring for their aging mother while her brother seeks fulfilment elsewhere, Jon (Jared Rogers), Maz’s only client, and Josie (Bryony Thomas), the call centre worker who rings up Jon and ends up trying NOT to sell him something because he’s the first person who agrees to talk to her.

It takes a little while to work out who these people are because the other characters who appear intermittently are their imaginary friends, and the separation between the real and imaginary characters isn’t always clear. My favourite of the imaginary cast is Rose’s fictional tango instructor, who flirts with her like mad and gives her relationship advice about her irresponsible brother and about Philip, her almost-too-perfect boyfriend. Actually Philip might be imaginary also; I never did work that out.

Equally well defined though more malicious is Martha, Jon’s imaginary friend, represented as a twin presence by Burnett and Thomas working in tandem. Martha’s purpose mainly appears to be preventing Jon from making any other friends. She becomes  jealous and demanding when Jon starts taking advice from Maz, the confidence-building motivational speaker. Remarkably, Maz isn’t a total failure in that area and Jon actually begins to form healthy relationships outside his own head. Finally there’s Josie, whose enigmatic imaginary friend is a moderately sinister shade of yellow. He doesn’t have a name but he does get a feather boa. (I don’t recall Maz having an imaginary friend but he seems to have enough troubles without them.)

The show is terrifically energetic with some striking imagery, such as Maz’s motivational addresses to the audience and the deeply intrusive presence of Martha. The impromptu call centre worker’s dance party is also lots of fun, as is the creative representation of Josie’s obsessive yellow paintings. The general story arc becomes clear as the characters grow increasingly intertwined. But there are still large swathes where there isn’t enough specificity to know precisely what’s going on – for instance whether Philip is a real person or whether he’s an imaginary point of stability in Rose’s difficult life. That could be a deliberate open question. There are other plot details that don’t quite hang together, though. Early in the show, Josie talks about getting in conversation with a shy person on a bus. I thought this would come full circle and turn out to be Jon (because why else would this scene be included?), but he then mentions that Josie, who he’s been talking to on the phone, lives in a different city. This leads to further confusion about Josie and Rose’s scenes together because Jon and Rose definitely both live in London. I found myself spending far too much time confused about small inconsistencies instead of absorbing the deeper questions of the play.

The Etcetra Theatre isn’t one of my personal favourite venues; it’s a stifling hot black box theatre above a pub, and not a terribly endearing pub at that. I always think it’s a miracle nobody passes out under the overheated lights in the small space. At any rate Nothing to See Here is moving to the Arcola for the remainder of its run which will hopefully be more comfortable. Despite some challenges the cast are really enjoyable to watch together. The playful material and the committed, energetic performances make it a lot of fun even when the plot is a bit murky.