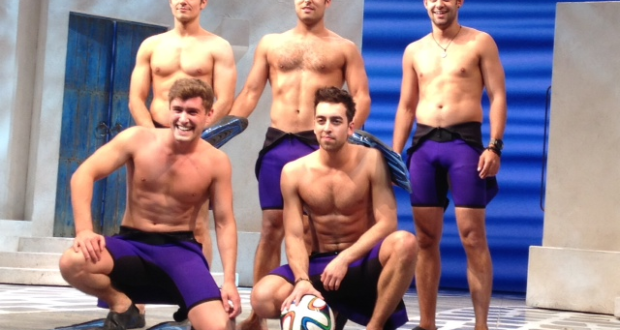 The cast of Mamma Mia show off their footballing skills.

The Talent’s Not Just On The Pitch This Summer – Sponsored

Fed up of football? Well catch a show instead!

Well, the FIFA World Cup 2014 is finally upon us. There’s no escaping it; the next month will whizz by in a flurry of yellow cards, national flags and – if you’re an England fan – bitter disappointment. All joking aside, even here at ET HQ we find it hard not to get into the spirit of things, despite our general ambivalence to the beautiful game. As fans of the performing arts, there’s something quite remarkable about seeing dives that look so genuine they would make Laurence Olivier proud . . .

But is there really no escaping the vuvuzelas? Well, actually, there is. You see whilst everyone’s heads are turned the other way, the theatres of the West End are still opening their doors to crowds every day. Unlike footballers of course, they don’t keep us waiting for four years between shows . . . One thing’s for sure though: the talent’s not just on the football pitch this summer!

So that’s why TheatrePeople.com have got together with the casts from 10 West End shows to produce a video called Fed Up of Football? The 45-second video showcases the football skills of a host of West End stars including the casts of The Commitments, Once, The 39 Steps and Mamma Mia!, and Dirty Rotten Scoundrels stars Robert Lindsay and John Marquez.

We’ve checked it out, and it’s great fun, but it highlights a genuinely important point that readers of ET will do well to remember: during big sporting competitions, the theatres of the West End offer their best deals.

As the World Cup draws closer, it’s the right time to remind our UK and international audiences that there’s a lot more than just footballing  talent on display this summer

And that’s what the Fed up of Football campaign is all about! Highlighting the fact that there is still a lot of incredible talent treading the boards of the West End every night. This is then backed up during the World Cup with some brilliant ticket offers that start from just £15. There will also be a series of flash sales with deeper discounts on match days to encourage ‘football-avoiders’ to take a trip to the theatre instead this summer.

‘There’s an incredible amount of talent waiting to be experienced in London’s West End at the moment,’ says Emma Perrott, Online Marketing Manager at TheatrePeople.com. ‘As the World Cup draws closer, it’s the right time to remind our UK and international audiences that there’s a lot more than just footballing  talent on display this summer – there’s a brilliant, eclectic mix of musicals, plays and comedies in Theatreland that’s guaranteed to score with audiences, whatever their age and taste .’

So really, the only thing left to ask is what are you waiting for?! Check out the video below – it is great fun – but also consider taking advantage of the World Cup . . . by heading off to the theatre!

Previous: The Devil and Stepashka, The Space – Review
Next: Half A Can Of Worms, RADA Studios – Review