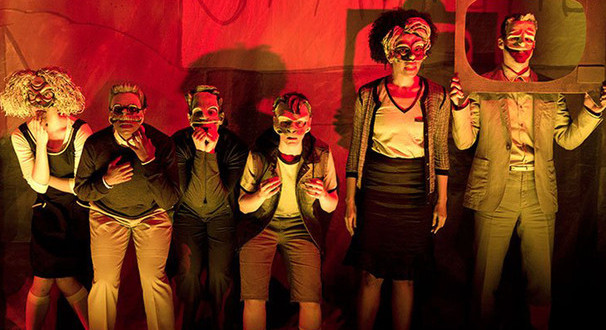 Pros: A strong cast take you on a post-apocalyptic journey into the future of American civilisation.
Cons: Far too long, lacked pace in parts and story is perhaps too complex for those not familiar with The Simpsons.
Mr Burns, Almeida Theatre – Review

Pros: A strong cast take you on a post-apocalyptic journey into the future of American civilisation. Cons: Far too long, lacked pace in parts and story is perhaps too complex for those not familiar with The Simpsons. I went into this show completely blind. From its title and the hand drawn poster of Bart Simpson, I had an inclining that what I was about to watch may have something to do with America’s most famous family. Usually I prefer to experience a production first hand as opposed to reading or researching much in advance. But my predilection backfired in&hellip;

Not the Almeida at its best. The cast and direction is superb, but the niche concept is simply too confusing.

I went into this show completely blind. From its title and the hand drawn poster of Bart Simpson, I had an inclining that what I was about to watch may have something to do with America’s most famous family. Usually I prefer to experience a production first hand as opposed to reading or researching much in advance. But my predilection backfired in this case, as Mr Burns, the new production from the unstoppable team at The Almeida Theatre, completely threw me for  the nearly three hours’ run.

I’m a massive fan of this theatre company’s productions, 1984 blew my mind a few short weeks ago, as did Chimerica last summer. So my expectations were high for Mr Burns, yet I left this show feeling disappointed. The premise is complex. Imagine the cast of The Walking Dead post-apocalypse, without the zombies, all sitting around a camp fire discussing an episode of The Simpsons. The episode in question is the Cape Fear motif where Side Show Bob plots to murder Bart. As a Simpsons fan, I got quite excited as this is actually one of my favourite episodes due to the fact that Cape Fear (the De Niro Scorsese version) just happens to be one of my favourite films. Once again my expectations were high.

Act I consists of the cast discussing this episode. Act II is set 7 years later and the cast are now recreating the episode of The Simpsons for a local am dram. Enter Act III (yes there’s two intervals): it’s 75 years later, and through a series of Chinese whispers, the episode has now become a thing of legend and worship. It’s as bizarre as it sounds.

Mr Burns is all about the popular culture we are obsessed with today and how it eventually defines us tomorrow, and at its heart, playwright Anne Washburn’s concept was superb. Unfortunately it just took too long to grab me, and by the time we got to Act III, I didn’t care anymore.

The cast, lead by Jenna Russell as Bart and brilliantly directed by Robin Ike, was incredible. Particular accolades go out to Michael Shaeffer’s terrifying Mr Burns in Act III, Wunmi Mosaku’s portrayal of the down-to-earth soul sister Quincy and Demetri Goritsas’s tormented Gibson. The music mash-ups, performed by the cast as the TV ads during The Simpsons, were a sheer delight. My hat goes off to composer Michael Henry, because anyone who can turn Britney Spears ‘Toxic’ and Ricky Martin’s ‘La Vida Loca’ into a serious religious hymn of the future is a genius. Ann Yee’s choreography also stood out, as it gave this show some much needed pace.

All in all, did I hate it? No. I think any show where you spark debate between 4 reviewers all the saying completely different things over some much needed wine is kudos to any creative team and playwright. If this review has piqued your interest, then definitely go see it and make up your own mind – just don’t go on a Friday after a long week, as you may find yourself staring at the exit.