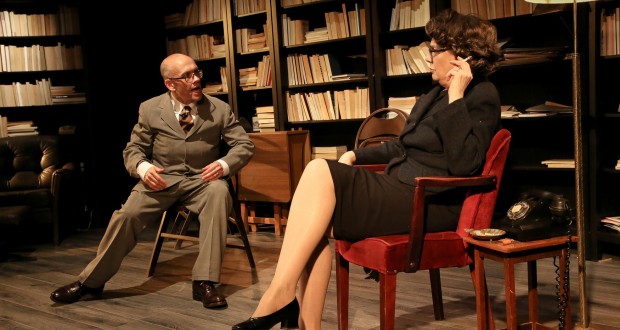 Pros: Great acting – the cast handled magnificently the wit and the comedy of this piece.

Cons: The King’s Head is a great theatre with a great atmosphere but most seats have limited legroom, so choose wisely when booking.
Foreplay, King’s Head Theatre – Review

Pros: Great acting – the cast handled magnificently the wit and the comedy of this piece. Cons: The King’s Head is a great theatre with a great atmosphere but most seats have limited legroom, so choose wisely when booking. Foreplay is a brilliant speculation on the sexual and intellectual intrigues of some of the world’s most towering thinkers. Theodor Adorno, his wife Gretel Adorno, and his arch rival Hannah Arendt are summoned to a dinner party to find out more about the man they all loved, Walter Benjamin. Their host is a young female student of Theodor’s, who is&hellip;

You don’t have to be a brainiac to enjoy this psychosexual thriller. An entertaining look at the private lives and ideas of some of the greatest minds of the postwar central European generation.

Foreplay is a brilliant speculation on the sexual and intellectual intrigues of some of the world’s most towering thinkers. Theodor Adorno, his wife Gretel Adorno, and his arch rival Hannah Arendt are summoned to a dinner party to find out more about the man they all loved, Walter Benjamin. Their host is a young female student of Theodor’s, who is out to blackmail and exact vengeance. The evening brings forth revelations of jealousy, infidelity, betrayal, and obsession. What especially ensnares the three intellectuals – not to mention countless academics since – is the prospect of further insight into the contents of the mysterious briefcase that Walter was carrying before his death.

Foreplay successfully presents the human side of science and the personal conflicts faced by scientists. It is the latest offering from playwright Carl Djerassi, who also happens to be an eminent scientist in his ninetieth year. It is 60 years since he helped to synthesise the first ever oral contraceptive pill and it is 30 years since he made the shift to writing fiction. The speech of the characters is elevated and meticulous and I enjoyed this mightily. It definitely comes across as unnatural at times, but that works to convey both the genius and the hypocrisy of the characters. And above all else, the comedy of this text shines through. The contrast made between erotica and pornography – one involving a feather, the other the whole chicken – got the most laughs!

The cast were fantastic at handling the wit and the more cerebral lines of the play. Jilly Bond as Gretel gives a fantastic look of amused puzzlement at her husband’s musings that sums up so much about a marriage of great intimacy but also sacrifice. Judi Scott gives a very charismatic and formidable Hannah Arendt; the audience was enraptured by her scathing remarks and put downs of Theodor, whom she blamed for ruining her husband’s career. Theodor, played by Andrew P Stephen, has the most demanding change to enact, from smug superiority to disillusionment and inept rage.

During the second half of the show, the tension builds and intellectual thinking gives way to its emotional impact. The most powerful scene is the confrontation between Theodor and Gretel as they argue and compete over their mutual infidelity. Here they come across as an ordinary married couple, as they dispute Theodor’s open and physical adultery to Gretel’s secret and psychological unfaithfulness.

Whilst the plot and the revelations and intimacies that unfold are one of the biggest appeals of the play, the last part felt a little rushed. The darker side of Theodor’s character that emerges felt too sudden a shift for my taste. But this is a minor complaint. By the end I understood the betrayal that Theodor felt, the resentment that Gretel had been bottling up. And even Hannah comes to a more compassionate view of the young embittered student’s skewed ambition.

The staging and set design helped to build a picture of this cutthroat world of post-war German academic life. I also appreciated the healthy dose of continental culture. The Bertolt Brecht poem, ‘I want to go with the one I love’, that Walter reads out was a delight to hear. As were his musings on the Angelus Novus, a Paul Klee drawing that hung to the left of the stage. This work wasn’t part of the recent Klee exhibition at the Tate Modern, so here’s your chance for a good look at a reproduction!