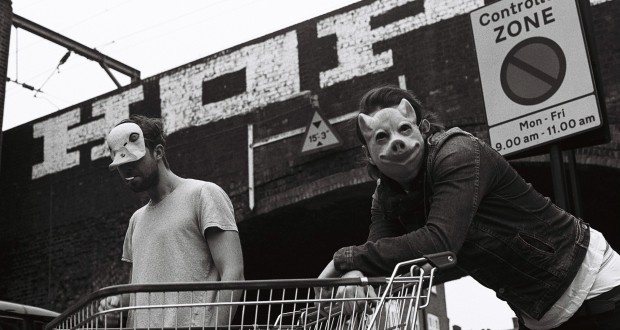 Pros: Ensemble pieces dotted throughout the performance to show every day London life were well directed and performed.

Cons: The show was hard to focus on due to my lack of comfort in the theatre.
Modern Jesus, The Nursery – Review

Pros: Ensemble pieces dotted throughout the performance to show every day London life were well directed and performed. Cons: The show was hard to focus on due to my lack of comfort in the theatre. I learnt a theory during my degree that there are those who would classify themselves as activists and those who would, if given the chance, negotiate a middle ground. I consider myself a negotiator, a lover not a fighter. So it was with this mind-set that I stepped into a world of passionate activism, where the 2011 Summer Riots met the Occupy Wall Street&hellip;

Not my cup of tea. A play representing the dissatisfaction of my generation in London that didn't ring true.

I learnt a theory during my degree that there are those who would classify themselves as activists and those who would, if given the chance, negotiate a middle ground. I consider myself a negotiator, a lover not a fighter. So it was with this mind-set that I stepped into a world of passionate activism, where the 2011 Summer Riots met the Occupy Wall Street movement.

Charlie is a checkout girl for Sainsbury’s. Her boyfriend, Luke, was a soldier but suffered life changing injuries and came back in a wheelchair. They live together in a small, stuffy and deteriorated flat in London and barely manage to survive in one of the most expensive cities on the planet. A city where the divergence of rich and poor (or should I say the super-rich and the normal?) is perfectly clear to see. Along with a group of ragtag individuals, Charlie wants to change the world, one shopping trolley at a time. And violence, as it turns out, isn’t out of the question.

Modern Jesus is a return to the gritty realism of some of the shows you used to see on Channel 4 in the early noughties. Not as funny or quirky as Spaced but definitely reminiscent of that type of series. It is a stark reminder that not that much has changed. We might now have technology we could only dream of 20 years ago but there are still dramatic inequalities in our capital city.

And it works. It raises these issues. Using a modern script with up to date references it allows us, the young audience, to be drawn into their anger and their empowerment. But it is swift in its deliverance of a powerful message (perhaps one that wasn’t necessarily the point of the piece) that this type of activism is replete with issues. Take away democracy and a clear power structure and all hell will break lose and people will start dying.

Ellie Rose and Katie Goldfinch portray Charlie and her best friend. Each woman makes the character their own and present rounded characters with strong emotions. Charlie’s mental breakdown is difficult to watch, although there is a slight lack of sympathy from this reviewer towards her rash decisions. As an ensemble the actors work well together, bouncing their lines sharply off one another. It is slightly terrifying how cult-ish the small flat became, and what that perhaps says about normal people and how they react in unusual circumstances. Sadly however, it didn’t ring true for me because, fundamentally, I don’t believe that it did present an accurate reflection on how most of us would react faced with similar circumstances.

Everything Theatre doesn’t just review the show. A small amount of the critic’s piece should be about the whole experience, and, although I was greeted cheerily at the door and the venue held all the classic charm of a small theatre under railway arches, I had an incredibly uncomfortable experience. The theatre was cold and I had to keep my coat on throughout. Additionally, the seats were wooden and stiff; I woke up the next day feeling as if I’d done 100 squats at the gym. You’d expect a short, 90-minute play to fly by, but with the aforementioned issues it didn’t. I’d really recommend cushions.

As a piece it was realistically written and performed with energy, but the script and talent on stage were let down by a uncomfortable venue. I was also not entirely sure about the conclusion of the play which was the only part I felt was unrealistic. Overall, I feel it would benefit from a smarter stage and perhaps an audience member with a different mind-set to me.