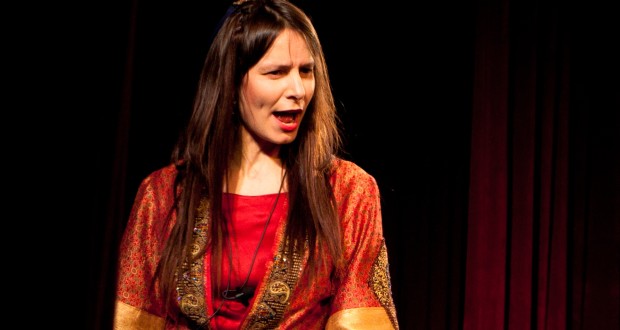 Cons: There is too much humour and silliness for a myth about the origins of civilisation.
Fairytales for Grown-ups Season 2, The Forge Camden – Review

Pros: Storyteller Xanthe Gresham’s supreme stage confidence is a delight to watch. Cons: There is too much humour and silliness for a myth about the origins of civilisation. Stories are everywhere – we weave them from our memories, tell them to our kids and watch them on the telly. Some become so influential that they define the world we live in, they make our history, our language and our identity. The Shahnameh is one such story for many Persians. The tale, akin to the Greek Illiad or the Indian Mahabharata, is an epic of great length, narrating tales of&hellip;

Witty asides, audience interaction and plenty of comedy will keep you engaged, but perhaps not inspired.

Stories are everywhere – we weave them from our memories, tell them to our kids and watch them on the telly. Some become so influential that they define the world we live in, they make our history, our language and our identity. The Shahnameh is one such story for many Persians. The tale, akin to the Greek Illiad or the Indian Mahabharata, is an epic of great length, narrating tales of bold heroes and gorgeous maidens, of Gods and troublesome demons. It is the myth from which the ancient history of Iran is drawn, and its rich metaphors and images furnish the very psyche of Persian speaking people. Countless Western writers, from the German polymath Goethe to the Victorian critic Mathew Arnold, have been inspired by its deep and ancient poetry.

Now imagine trying to convey some of the great beauty and power of the Shahnameh to a London audience, sitting in a chic Camden café, far in time and culture from ancient Persia. It is no easy task. Enter storyteller Xanthe Gresham armed with her bag of narrative tricks and verbal flourishes, and the skilled accompaniment of Iranian musician Arash Modi.

The duo make a spirited and entertaining attempt at recreating choice sections of the Shahnameh. Full of enthusiasm, Gresham canters about the stage playing all parts, whether herculean horse or wise widow, with equal verve and supreme confidence. Her speech is often beautiful and peppered with simple and time-honoured metaphors drawn from the stock imagery of mythology – vast oceans, heavenly bodies and fires burning bright.

Nowhere is Gresham’s story telling prowess more evident than in her recounting of the tragic tale of Rostam and Sohrab, in which a great warrior, who is so strong that the earth sinks beneath his feet, makes the wretched mistake of slaying his own son in battle. Gresham artfully crafts the story, moving with ease from the opening scenes of lust and pleasure to the horrifying crescendo.

As the tragic climax approaches Gresham’s storytelling becomes ever more solemn and compelling. The final battle scene is utterly gripping. It is unfortunate that she does not use this grave and serious mode of storytelling more. Too often she slips into comedy, making meta jokes about the stock characters of myths, the absurdity of distressed damsels and overly masculine warriors. All very funny, but it shatters the Shahnameh’s aura of otherworldly enchantment.

The interactive elements of Gresham’s storytelling also sometimes have this same puncturing effect. They shatter the solemnity of the myth. Watching one hundred or so North London theatre goers flapping their arms, pretending to be butterflies feasting on the eternal flames of creation, feels a tad silly and little bit naff.

That being said, the audience on the night I was in attendance did not seem to care, in fact they positively enjoyed it. One got the feeling that interactivity is to be expected at these events. They are organised regularly by the Crick Crack Club, a storytelling society of sorts, and many people in attendance were regulars and on the London tale sharing circuit. One would like to think that this assembled audience of narrative connoisseurs, who gather often to hear stories from Africa, India and beyond, know best how to listen to and appreciate a good yarn told with a dash of silliness. So perhaps, seriousness and solemnity are best left at the door at these events: one should buy a glass of wine and simply embrace the frivolity of it all.

Words by: Xanthe Gresham
Music by: Arash Moradi
Produced by: Crick Crack Club
Book Until: This was a one-off but the Crick Crack Club hold regular events. The next is in Dorset 29th March.

Previous: Angel and Now We Are Pope, The London Theatre – Review
Next: Then, Battersea Arts Centre – Review