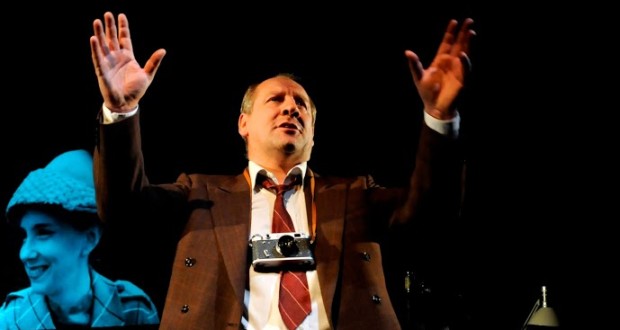 Pros: A nostalgic whodunnit that complements the retro nightclub atmosphere of the St James Studio.

Pros: A nostalgic whodunnit that complements the retro nightclub atmosphere of the St James Studio. Cons: The play is around two hours long – some coula bit intense for a one-man show. The first time that I ever went to the St James Theatre, I went to see The Thrill of Love, a tale about the last woman in Britain to be executed in the 1950s. The space seems to reek of yesteryear so it seemed only right then that that I should again see a play here that harked back to that bygone age. As if to affirm&hellip;

A one-man tour-de–force thriller that reminds us what’s great about live theatre.

The first time that I ever went to the St James Theatre, I went to see The Thrill of Love, a tale about the last woman in Britain to be executed in the 1950s. The space seems to reek of yesteryear so it seemed only right then that that I should again see a play here that harked back to that bygone age. As if to affirm this, the corridors in the theatre’s Studio wing are adorned with photographs of stars of the Fifties and Sixties such as Marilyn Monroe, Jayne Mansfield, Sammy Davis Jr and James Dean. But I digress.

Set in post-war Britain, Bloodshot focuses on a former police photographer whose latest freelance assignment has disastrous consequences for himself, the woman he’s shadowing, and her former acquaintances. The photographer Derek Eveleigh is played by Simon Slater who also plays an assortment of other characters, including an Irish comedian, an American musician and a Russian conjuror. Whether a one-man shows fails or succeeds is wholly dependent on the skill of the actor and the strength of the material they are working with – there is nowhere to hide. I admit this was in the back on the mind when I first arrived, but I’m pleased to say that my concerns were ill founded. Slater effortlessly flitted between the different characters and the writing was nuanced, delivering rich period detail of life during the Blitz and subsequent years.

In terms of set design, it was utilitarian – suggesting various locations with a minimum of fuss. Behind it stood a screen where the reflection of sunshine on the Thames was projected, as well as images of Cassandra Ammans – the woman that Eveleigh follows. This ‘opened up’ the relatively small stage and lent visual interest to the piece, as well as making for some emotionally charged moments.

Sound design is seldom mentioned in reviews as something worthy of note, but having seen other productions recently where its use seemed to be an afterthought, the clarity and timing of sound effects used where spot on.

However, all the technical achievements would be for nought without the sterling performance of Slater. Aside from acting on stage for the best part of two hours, this phenomenally-talented actor played the saxophone and ukulele, as well as performing a number magic tricks. There seemed to be nothing he couldn’t do!

As well as the impressive skills that Slater exhibited, visitors to this show can expect to see a well-crafted, entertaining tale that highlights among other things, the cultural make-up of London’s population, the differences between the boroughs, also exploring the relationship between a photographer and his subject.

At the end of Bloodshot, you could tell Slater had given the show his all and he received a rapturous round of applause. Judging by the happy faces after the show (including my own), it was one he richly deserved.