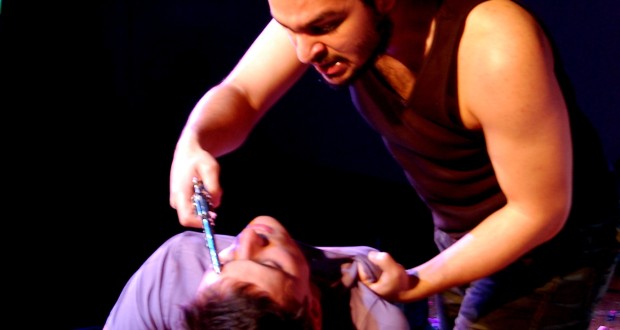 Pros: Some very bold performances from an amateur production. Good staging of some tricky moments in the text and strong use of make up.

Cons: A little more commitment to the piece would have produced a harrowing theatre experience. The set and sound lacked style.
Blasted, The Old Theatre (LSE) – Review

Pros: Some very bold performances from an amateur production. Good staging of some tricky moments in the text and strong use of make up. Cons: A little more commitment to the piece would have produced a harrowing theatre experience. The set and sound lacked style. First of all, a confession: I am a huge fan of Sarah Kane. It is my constant lament that her work is under-produced in this country. So I was pleased to hear that the London School of Economics Drama Society had taken on Kane’s debut play Blasted. The play, set in a hotel room&hellip;

Some good moments, but lacked consistency. A brave production.

User Rating: Be the first one !
First of all, a confession: I am a huge fan of Sarah Kane. It is my constant lament that her work is under-produced in this country. So I was pleased to hear that the London School of Economics Drama Society had taken on Kane’s debut play Blasted. The play, set in a hotel room in Leeds, features mismatched couple Ian and Cate. Their abusive relationship is interrupted as war literally explodes into their room; a solider claims the territory, provisions, and its inhabitants, for his own. Kane’s first work, a brutal piece, fuses intimate drama with a wider political agenda and thrusts the comparisons between the two down the audience’s throat. A perfect example of the ‘In Yer Face’ trend of 1990s British theatre.

A hallmark of Kane is her brutal approach, be it in the writing or the staging of violence, even of sexual violence. Katherine Everitt suggests some excellent methods to tackle the difficult scenes in the play. The masturbation at the beginning is subtle and effective, focusing on Cate’s disgust and reluctance rather than the, um, task at hand. All brutality is confidently placed downstage, never shied away from, though some moments don’t quite hit the spot. The vocalisation and brutality of the male rape lacked depth and the weapons weren’t always treated with the weight they deserved onstage. There were some moments which were nicely done, but this wasn’t consistent throughout the performance.

Praise goes to the three performers who bravely tackle the script. Lodewijk Vriens fully commits to the nudity in the play, stripping off – to shocked gasps in the audience. His inclination to laugh through Ian’s characterisation does grate, though this may be borne of nerves. Rachel Williams is simply adorable as Cate. She portrays her childishness quality to perfection and flips between vulnerable and aggressive with style. She was a treat to watch. Ayan Meer brings a fresh energy with the entrance of the Soldier. He delivers his speeches well and has some excellent comic relief just before his final act of horror.

I enjoyed listening to the audience reaction as much as I enjoyed watching the play. Being in a room full of people who had no idea what was about to happen was thrilling. And they were very shocked at some scenes! Full credit to the cast who took it in their stride.

Blasted calls for the room to be blown apart – no mean feat for any budget. This is hinted to through use of debris and some sound effects, but left me wanting as it is the moment of the play – the reason for the title. The sound, by Julia Ryland and Joe Grabiner, was heavy handed, notably during the montage of Ian’s solo scenes. The continuous lightning SFX went on for far too long, when silence would have been very effective to highlight his loneliness. Ryland and Grabiner fared better with lighting. The rig was limited so this was kept simple, tightening on key moments around the action onstage.

Most fringe theatre design work is about making a professional-looking set on a shoe-string. Unfortunately the hotel room, described as expensive in the text, lacks the polish. The eye is drawn to the gaffer-taped sofa as a bed and the gap beneath the flat on castors which shows the sandwiches, breakfasts and gin waiting at the door. A little more attention to detail would have been appreciated – even a touch of black material to mask the movement of feet offstage. Theatre needn’t be expensive, but it shouldn’t look cheap.

There is clever use of stage blood; Ian’s eyes were particularly impressive. Costume and make up were well done, both by Natalia Brown.

All in all it was a brave student performance, with some good ideas for staging. A little more finesse from all elements would have resulted in a devastating production. Coming from a self confessed Kane fanatic, that is high praise indeed.