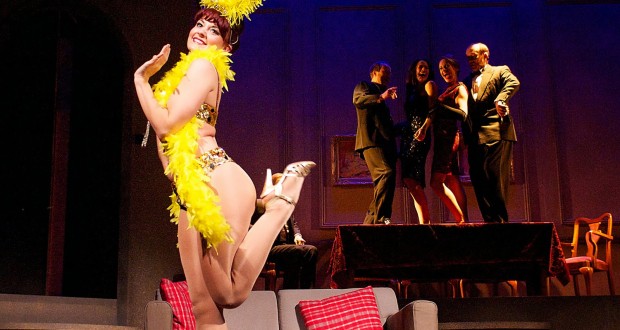 Cons: The second half fails to maintain its hold with scenes focusing on the technicalities of the Profumo Affair.
Keeler, Charing Cross Theatre – Review

A sensual insight into the Profumo Affair that will make you itch for a vodka martini.

Keeler tells the story of Christine Keeler’s involvement in the 1963 Profumo Affair as stated in her autobiographical novel The Truth At Last. It unravels the relationship with Stephen Ward, her shady benefactor, and sexual affairs with Conservative Party member John Profumo and Russian spy Yevgeni ‘Eugene’ Ivanov. This mix of a young girl being sexually linked to powerful men from the UK and USSR exploded into the events that shook British politics, and which resulted in Profumo’s resignation as a Secretary of State for War.

Don’t be fooled by the underlying political plot of the play; much like the picture in the poster (nude woman sitting on a black chair, torso covered by the backrest, arms folded to hide her breasts and long legs placed seductively around the seat) director Paul Nicholas creates a sexy portrayal of 60s nightlife and the game of power that Christine was thrown into.

Keeler, (Sarah Armstrong), Profumo (Michael Good) and Ivanov (Alex Dower) all circle around a fourth, scheming character: Dr Stephen Ward. Ward was Christine’s platonic parental figure, having discovered the young Keeler working as a showgirl. He was a socialite of the British political scene with a very snake-like purpose in mind: obtaining as much information as possible from high-up sources to ensure his advance. Paul Nicholas (also the Director) gives life to this calculating, charming character (as a side note for all musical lovers, Nicholas was the original London cast Jesus in Jesus Christ Superstar). He manipulates Armstrong’s playful and trusting character into her rendezvous with John and Eugene with instructions to obtain information about current political affairs.

There’s a good mixture of sex, cabaret and international politics to guarantee a very entertaining evening. Charing Cross Theatre plays well with the theme; it is inconspicuously situated underneath a passage behind Charing Cross Station. With a very Jazzy bar next to the entrance and the theatre downstairs it makes one feel like a spy on the way to secret meeting. I have two words to describe what the stage looks like upon entering the theatre: flamingo pink. There are two platforms to the left and right serving as entrances to the main area – Ward’s apartment – from which cabaret dancers emerge to give a little sauciness to scenes. Behind the arrangement for Ward’s living room are two panes, which slide open to reveal a second, more versatile stage for the other settings.

The first part of the play builds the relationships between Christine, Stephen and the surrounding characters. Scenes have a good pace and they are fun and naughty. However, after the interval the focus turns to the scandal and its consequences, and it failed to grip me as the first part did; dialogues in the courtroom seemed to go on a bit, and there was an additional character barely introduced in the first half taking too much of the spotlight and confusing me.

Keeler is a provocative show, and it was fun to be given a window into the secret lives of the powerful fifty years ago. Watching Paul Nicholas as the sleek socialite on the rise to power feels like being hypnotized. From what I read about Christine Keeler I half expected her character to be somehow pretentious, but Armstrong delivers a confident, naive young girl who was drawn into a life where she felt admired. One can really feel the source behind the play was the voice of the real Christine Keeler.