Home » Reviews » Off West End » In Cahoots, Hen and Chickens

In Cahoots, Hen and Chickens

Pros: Fresh, energetic and original. In Cahoots show a lot of promise and works the audience well, especially in such a small venue. Their improvisation is very strong and shows real comedic talent underneath the written material.

Cons: The performance wasn’t as slick as it might have been. Whilst this added a certain
organic quality to their show, they need to be careful not to let it get out of hand.

Our verdict: A lot of promise. At times they are eye-wateringly funny and their razor-sharp improvisation adds the finishing touches to mostly well-conceived sketches. The Film Noir and Scottish sketches are highlights.

I often feel like sketch shows have had their day. They peaked in the Nineties and were a staple of 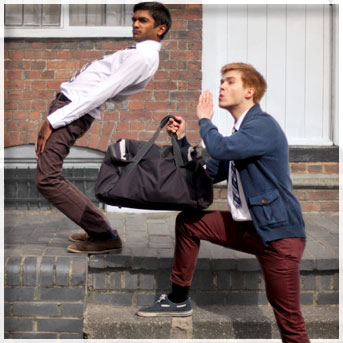 mainstream entertainment following their heyday on screen and stage in the Eighties. But time rolls on, and In Cahoots are the first sketch act I have seen in some time. The problem is that sketch shows tend to be formulaic and they rely on established characters which, without developing full personalities, offer enough familiarity to buy laughs by virtue of well-worn jokes.

The delight of new comedy is that none of the characters are familiar. It is clear that Paul Raymond and Luke Manning have aimed their writing at turning established scenarios on their heads, which is a classic sketch technique, but without relying on cheap, recycled gags. Whilst some of the comedy is derivative, there is enough original material to keep the audience chuckling throughout. In part, this is helped by the pair’s infectious personalities; the energy and wit comes fizzing off the stage.

The sketches are broad enough in theme to maintain interest and pace but cohesive enough in style and technique to thread together like a naughty Medieval tapestry. As is the case with all sketch-based comedy, some of it hits and some of it misses. Perhaps because they are an obvious topic, the racial jokes tend to miss the mark somewhat (done to death, maybe, by the Kumars and co.?) and a couple of the skits are a little too minimalist for their own good.

Where In Cahoots excel, though, is in their comedy-for-the-sake-of-it moments. This is when their deft ad-libs come into their own. Nothing in life creates more tension (divorce doesn’t even come close) than the knowledge that a performer is about to attempt “An Accent”. The introduction of the Scottish tourist office midway through the show filled me with enough dread to cause an attempted escape from the theatre. Two things stopped me: first, the chap seated between me and the door, and secondly, the fact that Luke Manning’s Scottish accent is flawless. Much to my relief and joy, this never-ending sketch was the highlight of the show. Laced with improvisation, it gave the wonderful Morecambe-and-Wise-esque impression that Raymond and Manning had five solid minutes of trying to put each other off their respective games.

As the former pair demonstrated on a weekly basis, corpsing in live sketches is a sure-fire way to get laughs. Embarrassingly (take note: I rarely reveal embarrassing secrets. About myself, anyway), I often cry with laughter at the sight of two comedians ruining each others’ composure. Thankfully, In Cahoots
succumbed just enough to lend the show an organic, off-the-cuff flavour, but not so much that it becomes silly. It is a fine line, though.

If I were to pick out a weakness (aside from the sketches that miss the mark; they are inevitable), it would be that Raymond and Manning might be guilty of engaging with the audience a little too apologetically
at times. Subtlety is the name of the game, and they were just on the wrong side of it.

I don’t have the technical ability to produce half a star, so I’m having to go with a 3. Make no mistake though, dear readers, this is a very good debut.

In Cahoots runs at The Hen & Chickens Theatre Bar until 20 July 2013 before transferring to Meadow Bar, Edinburgh from 1 to 25 August 2013.
Hen & Chickens box office: http://www.unrestrictedview.co.uk/

Previous: Can You Hear Seagulls?, Upstairs at the Southern Cross
Next: The Precariat, Finborough Theatre