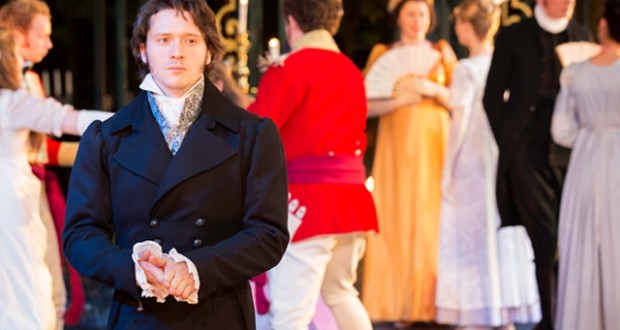 Pros: A beautiful set and accomplished acting from a young cast bring new charm to this much loved novel.

Cons: The speed of the narrative seemed unrealistic. This is understandable considering how much is trying to be put across in a short space of time.
Pride and Prejudice, Regent’s Park Open Air Theatre

Pros: A beautiful set and accomplished acting from a young cast bring new charm to this much loved novel. Cons: The speed of the narrative seemed unrealistic. This is understandable considering how much is trying to be put across in a short space of time. It is a truth universally acknowledged that when there is an anniversary of one our best known classic novels, there will be events galore. The bicentenary of Pride and Prejudice has arrived, and regency balls, tours and public readings are everywhere. So this was the perfect opportunity for a new play, and what more&hellip;

Quite simply, this is a must see for all Austen fans this summer.

It is a truth universally acknowledged that when there is an anniversary of one our best known classic novels, there will be events galore. The bicentenary of Pride and Prejudice has arrived, and regency balls, tours and public readings are everywhere. So this was the perfect opportunity for a new play, and what more perfect place to watch it than in Regent’s Park Open Air Theatre under a blanket with a cup of tea?

Now, I will be very honest, and this will horrify many of you: I have never liked Pride and Prejudice. Jane Austen is an author I have never warmed to and I therefore do not know the intricacies of the story. However, I found Simon Reade’s adaptation splendid. The story follows Elizabeth Bennet (Jennifer Kirby), as she attempts to live up to the expectations of the society she is in. When Mr Darcy (David Oakes) visits town, his arrogance and rudeness affronts Lizzy but revelations throughout the story soon result in a change of heart on her part. Amongst all this is a flurry of love, marriage and drama, which is to be expected when there are five sisters in one family.

The script has been beautifully written and sounds very Austen-esque. It has a charm of its own and has resulted in a new standard to live up to when it comes to on stage adaptions. The final scene in which letters are read out to tie up what has happened to the characters was a particularly clever device. The actors made light work in delivering complicated and tongue tying sentences.#Max Jones’ set was also quite brilliant. A two tier revolving set with wrought iron gates and stairs was very cleverly used to show both changes in time and place. It moved us swiftly from Longbourn, to a dance at Netherfield, and then on to one of the most visually impressive scenes at Pemberley, where the cast stood as if they were paintings in the archways.

The cast of 25 actors, many of whom were making their professional debut, really put their all into making some of the smaller roles much more than they have been in other productions. Eleanor Thorn in particular was brilliant as the flirtatious and yet naïve Lydia. Also worth mentioning are Leah Brotherhead, who brought a great amount of wit to bookish Mary Bennet, and Olivia Darnley, as Charlotte Lucas. Jennifer Kirby, also in her professional debut, played a strong and feisty Elizabeth, and I think for some die-hard fans, perhaps too feisty. However, she did manage to get across some of that jocularity and irony which is so loved in this famous character.

However, the star of the show was without a shadow of a doubt Ed Birch as pompous Mr Collins, the clergyman cousin of Mr Bennet and heir to his estate. As soon as he walked on to the stage, he had the audience laughing. The uncomfortable moment where he joins in, partnerless, to dance with Elizabeth while she is dancing with someone else, is quite wonderfully done.

The only downside of this production, and I do not think anyone can be blamed for it, is the haste in which the action progresses. This results in some of Austen’s irony and subtlety being lost. Mr Darcy’s sudden change of heart towards Elizabeth also seemed far too swift and as a result lacked some spark. However, going from book to boards is never going to be easy and I think an extremely good job was made of getting in as much as they did.

Breaches, Bonnets and the Bennet sisters; can there be a better way to spend a summer evening than watching young love developing and some of the Country’s favourite characters unfolding? This should definitely be on your to do list this summer!